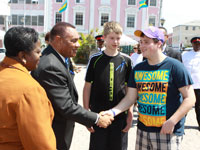 Officials from the Ministry of Social Services and Community Development, the Ministry of National Security, Ministry of Tourism and the Ministry of Health joined forces earlier this week to bring attention to one of the more vexing problems facing the country – that of child abuse – by hosting a one-day education and awareness campaign in Rawson Square.

(The Police Force Band provided visitors and Bahamians with a musical treat that as usual left their audience clamouring for more as part of celebrations surrounding the Band’s 120th anniversary.)

Minister of Social Services and Community Development, Melanie S. Griffin, said the “collaborative effort” was held in advance of Child Protection Month that will be observed during the month of April throughout the Commonwealth of The Bahamas.

Mrs. Griffin said the collaboration was a “great and wonderful example” of how those agencies can come together and work assiduously for the benefit of the country.

Mrs. Griffin said it was “critical” that the message detailing the importance of reducing the incidences of child abuse in The Bahamas begin at the highest levels of the country in order to drive the message at all levels throughout the Commonwealth.

“It is extremely important that the message starts at the top in terms of the leadership of the country,” Mrs. Griffin said. “When I was in this position (as Minister of Social Services and Community Development) first in 2002, and I had a chance to discuss with the Prime Minister (Rt. Hon. Perry G. Christie) what we were doing with regards to our child protection efforts and some of the incidences that were going on he advised me to do what I had to do and allow the chips to fall where they may. That showed me how intent he was on protecting our children.

“The presence of all of the Cabinet Ministers here today, and my presenting all Members of Parliament with Blue Ribbons in the House of Assembly on Monday shows that the leadership of the country is against Child Abuse and so it is my belief that once the community can see the support coming from the top, it will flow down to everyone else,” Mrs. Griffin added.

Mrs. Griffin said child abuse is on the increase in The Bahamas with almost 1300 cases reported between (2011-2012). Many more cases, she said, go unreported.

“We must do something about that because as long as there is one child being abused, our work is not done,” Mrs. Griffin said.

Minister Griffin said her Ministry will continue to work with the National Child Protection Council, headed by Pastor Gil Maycock and Dr. Novia Carter-Higgs, the Church and all other government and non-governmental agencies and organisations, communities and community associations, in an effort to “take the message of Child Protection to all parts of The Bahamas.”

Mrs. Griffin said pinning Blue Ribbons on Members of Parliament during the last House Session was an opportunity to bring awareness to the meaning of the colour.