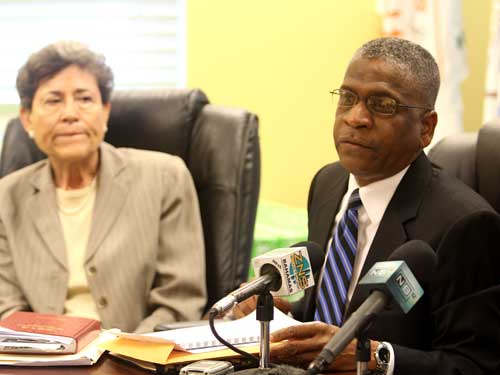 Mr. Carter said the Committee will hold press conferences every Monday at the Ministry of Youth to update the public on the events or to announce changes in the itinerary.

He noted that events for the 40th Anniversary started in November 2012 with the Sir Sydney Poitier Bridge and will continue to Boxing Day Junkanoo December 2013.
“This anniversary allows us abundant opportunities to tell and retell our stories to a new generation of Bahamians who would need to appreciate that the journey to nationhood started long before them but requires (that) they continue its development and ignite our country’s future with (the) inspiration only true Bahamians could give it,” Mr. Carter said.

Mr. Carter presented Dr. Tracey Thompson who will replace Nicolette Bethel as co-chair of the Committee.

Head of the Secretariat for the 40th Bahamas Independence Celebrations, Jack Thompson announced that the Secretariat would be fully operational Thursday, April 11, 2013. It will be responsible for the day-to-day operations.

It will be opened five days a week and is located at The Bahamas Law Enforcement Cooperative Credit Union Building, at Number 14 Collins Avenue just south of Kelso Medical Lab. The telephone number is 356-2100/356-2104; and the fax number is 356-2135.

Mr. Thompson added that the 40th Bahamas Independence Celebrations website would be launched by Thursday, April 11 or Monday, April 15 the latest.

The website will include the calendar of events as well as information pertaining to the history and future of The Bahamas.

Upcoming events for June include The Bahamian Project, a portrait photography exhibition held at the National Art Gallery of the Bahamas (June 11th).