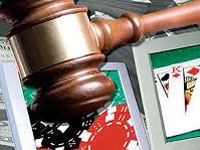 Members of Citizens For Justice (CFJ) believe that the Chief Justice made the correct and proper ruling when he discharged the conservatory order that was in force which prevented the closure of illegal gambling houses throughout the Bahamas.

We are now calling on the Commissioner of Police to do the right thing and arrest operators and customers at webs shops immediately without any political directives or interference. The ruling was a clear victory for the people despite the many special interest groups attempting to frustrate the will of the Bahamian people.

We do not believe that the prosecution fought as aggressive as it should have in this very important case and expected the government to utilize the services of a Queen’s Counsel to contend with the very experienced and qualified legal teams representing the gambling bosses.

In January, Bahamians voted unanimously against the legalization and regulation of web shop gambling.  Subsequently, the Prime Minister issued an order for all illegal number houses to be immediately shut down or the owners face arrest and prosecution. Web shop bosses have deliberately and blatantly broken the gaming laws of the Bahamas and have publicly admitted their involvement in the nefarious gambling enterprises.

These illegal operations rather than yielding to the will of the people, have expanded their web shops with no respect for the laws of the Bahamas or any fear of police action. It is a crime to gamble without a license issued by the Gaming Authority, yet these criminal enterprises continue to flourish as they wreak havoc throughout the nation.

Citizens For Justice will be carefully monitoring the actions that will be taken by the Attorney General, the Minister of National Security and the Commissioner of Police. The people of the Bahamas have spoken loudly and do not expect their voices to be silenced through the courts. Number bosses cannot be trusted. They said before the referendum that  should the people vote against the legalization and regulation of their trade, they would voluntary shut them down.

To the contrary, these illegal gambling operators, have kept their doors wide open and are adding more locations every month. The negative effects of gambling has taken its toll on families and our economy. As the number bosses continue to enrich themselves off the backs of poor unsuspecting and vulnerable Bahamians, the government and police should be protecting citizens and residents from their continuing criminal enterprises.

We urge operators to shut down these web shops immediately and operate legitimate businesses for the sake of their workers and the restoration of law and order in our nation.