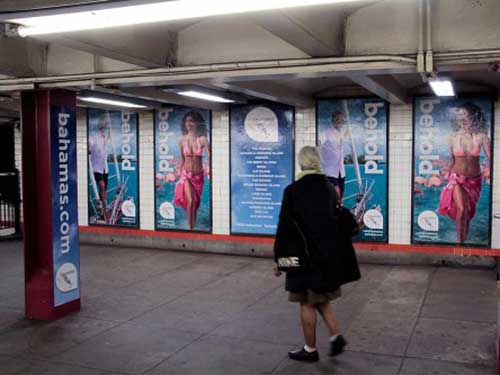 Passengers moving through New York’s Rockefeller Center subway station will behold the beauty of The Bahamas as the country’s tourism advertising campaign takes over the station until May 5.

Rockefeller Center is a complex of 19 commercial buildings and is a top attraction in New York City. Millions of people get to the complex by way of the Rockefeller Center subway each year, and those travelling through it over the next several weeks will get a hefty dose of The Bahamas due to the presence of the Behold campaign’s domination of the station.

“One of the goals of Behold was to allow the natural beauty of The Bahamas to capture people’s attention,” said Nalini Bethel, sr. director for Communications in the Ministry of Tourism. “It certainly is doing that in the subway of Rockefeller Center. The art work completely changes the atmosphere of what would normally be a bleak subway station and of course, it builds desire to be in the beautiful Islands Of The Bahamas, where travelers will get to experience the real thing.”

Ms. Bethel said the Ministry of Tourism also intends to have a year-round advertising presence, rolling out a series of television, magazine, billboard and online ads. “We want potential consumers to call 1-800-Bahamas and go to Bahamas.com to explore our new website and book their escapes from their everyday lives, which is clearly the intent of our advertising.”

The Behold advertising campaign launched in February with television spots featuring former NBA star Rick Fox, supermodel Shakara Ledard and illusionist and investor David Copperfield. The campaign also includes traditional print and out of home components. At the moment its focus is on subway “station domination,” which began with Rockefeller Center.

On May 6, the station domination moves to Grand Central Station in New York, the world’s largest train station. The MTA recorded an average weekday passenger load of more than 150,000 through Grand Central last year.