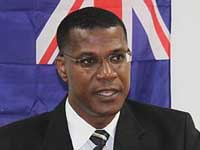 In a brief statement on the recent arrests in the Turks and Caicos Islands (TCI) of two elderly American tourists on charges of each carrying a single bullet in their luggage, Premier Rufus Ewing repeated small portions of what Governor Ric Todd and opposition leader Sharlene Cartwright Robinson had already said.

According to Ewing, one, he is leaving the issue in the hands of the police; and two, police in doing their work need to be sensitive to what they are investigating.

On April 25, TCI police arrested Cathy Sulledge Davis, the 60-year-old co-owner of a Dallas real estate firm, and charged her with carrying ammunition.

Davis appeared before the chief magistrate on April 26, when she was remanded into custody pending a sufficiency hearing to be held in the Supreme Court on Friday June 7, 2013.

She was, however, granted leave to apply for bail in the Supreme Court, at which time she was released on $4,000 cash bail.

In a similar incident the following day, also at the Providenciales International Airport, police arrested Horace Avery Norrell Jr., a retired neurosurgeon, who had traveled to the TCI with his wife to celebrate his 80th birthday. He was also charged with carrying ammunition.

Norrell was also remanded into custody pending a sufficiency hearing to be held on June 7.

After spending the weekend in jail, because no judge would stay late on a Friday to hear his bail application, the senior citizen was released on $4,000 bail.

It is widely believed locally that the bullets were planted in the visitors’ luggage. However, the motive for doing so remains a mystery, except for some speculation that the incidents are a follow on from two earlier attempts by the Progressive National Party (PNP) to shut down the tourism industry in the TCI.

Even in this there is inconsistency, as the newly elected PNP government desperately needs the income generated by the tourism sector to deal with the debts left by the previous PNP administration.

Meanwhile, last week two US senators, Bill Nelson from Florida and Ted Cruz from Texas, got involved in the arrests of the two American visitors.

On Thursday, Nelson and Cruz sent a letter to John Dinkelman, charge d’affaires at the American Embassy in Nassau, The Bahamas, requesting an “expedited investigation”.

On Friday, Nelson said he is expanding his original request to include not only similar incidents that have occurred since January but also “to include anytime.”

In a news release issued on Monday by Nelson’s office, the senator stated he has received assurances from the US embassy staff in The Bahamas that there were no similar cases in the Turks and Caicos in the recent past.

However, the Sarasota Herald Tribune pointed out in its latest report on Monday that this is not the case.

Last Thanksgiving, a high school graduate from Florida, Kevin Bingham, was working in the TCI when he fished an old, highly corroded AK-47 assault rifle out of a deep, salt water hole.

But instead of snagging a cool souvenir, Bingham found himself locked in jail for eight bleak days, denied bail and awaiting trial, the newspaper reported.

According to the Herald Tribune, Bingham, for his part, is not going back. He now works as a dive boat captain in Key West.

“They arrested me for possession of a firearm, and I said, ‘What? This thing is not a firearm. It is a piece of rust. It is never going to shoot again,’” Bingham said. “And they said, ‘That’s up to the firearms expert.’”