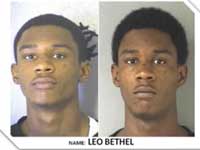 The Royal Bahamas Police Force, investigating the shooting death of 34-year-old American tourist Kyle Bruner, are reportedly questioning two suspects in connection with the murder, and seeking a third.

Bruner, a Chicago resident working on a visiting sailboat, was shot in the neck while trying to defend a woman from being robbed.

According to police reports, 19-year-old suspect Antone “Lolly” Bastian of Abraham Street off Kemp Road, was arrested on Monday, May 13, 2013 at 12:30pm at Market Street and Trinity Place.

In addition to the two arrests, police are searching for a third suspect, Leo Bethel, 18, of Balls Alley. Wanted posters have been issued in an attempt to locate Mr. Bethel.

Investigations are ongoing. Anyone with any information regarding the murder of Kyle Bruner or the location of Leo Bethel is asked to contact police at 911 or 919, the Central Detective Unite at 502-9991, or Crime Stoppers anonymously at 328-TIPS.