Sean Connery Lends Voice to Save The Bays 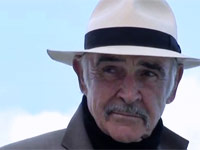 Legendary actor and long-time Bahamas resident Sir Sean Connery this week added his voice to the growing numbers supporting Save The Bays, a national movement to protect and preserve marine resources and quash unregulated development that threatens the waters and marine life of the country.

“As a longtime resident of the Bahamas, a country whose beautiful waters and beaches have been featured in a number of my films, I am proud to be a supporting member of Save The Bays, and to urge all Bahamians, citizens and residents, to support our effort to defend Clifton Bay along with all the natural resources of this country,” said Connery.

The actor who earned a singular place in the annals of spy thrillers with his early portrayal of secret agent 007 James Bond, the consummate connoisseur of all things action-packed, dangerous and beautiful, has called Lyford Cay in The Bahamas his home for many years. It’s a neighbourhood surrounded on three sides by Clifton Bay and the Atlantic Ocean, waters once brimming with majestic coral reefs, storey-tall sea fans, colourful tropical and deepwater fish that attracted divers and film producers from around the world. The bay and surrounding waters have been stressed by industrial and commercial oil spills ever since Connery parked his golf bags and awards inside the door of his somewhat modest home not far from the shore.

More recently, the waters have been affected by unregulated development, one of the platforms that gave rise to Save The Bays. In the few months since its establishment, Save The Bays has gained the support of hundreds, won more than 5,000 Facebook friends and fans and is garnering signatures by the hour on its petition to the Bahamian government to pass a Freedom of Information Act, require accountability for oil spills, stop unauthorised or unregulated development and pass an Environment Protection Act. The organisation has also filed court action requesting a judicial review of matters it says have led to the threatened marine environment conditions.

“In the movies, you may get a second chance,” said Save The Bays Director Fred Smith, QC, referring to the first Bond movie shot on Bahamian soil and in Bahamian waters, You Only Live Twice (1967). “In real life, we have to make this happen now, we have to save the bays for our children before it is too late and we have depleted the fish, conch and crawfish stock as other countries in the Caribbean have. This is the fight of our generation and adding the unmistakable voice of one of the greatest actors and heroes of our age, Sir Sean Connery, to the effort demonstrates the breadth, depth and urgency of the cause.”

Six Bond movies have been shot in The Bahamas with the first one, Thunderball, starting in 1965 and while Connery has earned an Academy Award, two BAFTA Awards and three Golden Globes, none were for the role that positioned him as the dashing, daring, not-to-be-distracted superman. Connery won an Oscar for best supporting actor in The Untouchables.