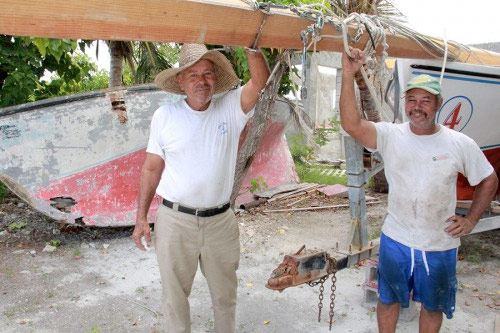 Trophies are everywhere: on shelves and tables and across the floor. Winners live in this house, and they span at least three generations. This is the house of the Knowles family in Mangrove Bush, Long Island. It is a house of boat builders and sailors. When it comes to Family Island regattas, they own the “winningest” boats.

The long hours spent in the sun shows in their cracked lips and leathery looking skin, burnt by the tropical sun. It shows in their toned muscles and steady hands.

Two of his sons are learning the trade: Marco, the eldest at 21, and Miko, the youngest at 17. “Marco has been helping me since he was four years old,” said Mark. He currently works in construction, as do many of the men when regatta season ends.

Mark has won 14 regattas in his boat, the New Susan Chase, which pays homage to one of his father’s early boats. In the 2013 Regatta, he won the Governor General’s Cup. He lays claim on behalf of his family to building “the fastest boats on the island.” He does not divulge the boat building secret, but he said trophies tell their own stories.

The oldest known patriarch in the family is believed to be George Richard Knowles. He is buried in an unmarked grave, just half a mile from Mark’s residence.

“We traced him back to England. When America had its revolution and they got their independence, he moved to Georgetown, South Carolina. They didn’t want to be under England. So they left America and came to the Bahamas,” said Mark, recounting the story that his father told him.

The 75-year-old Laurin Knowles is still a youthful looking sailor. He remembers his great grandfather as a carpenter and boat builder, who first migrated to Eleuthera and then sailed across to settle in Long Island.

“My grandfather got into it and then it was handed down to my father then to me. And I taught my boys how to build boats. After school and on Saturdays, the kids would help to build the boats even if they didn’t want to. It was the family business so I couldn’t have six boys and they can’t build a boat,” said Laurin.

His first boat ever was the Gloria Cay. The second, which he built in 1959, was the Susan Chase. In all, he said about ten boats have been crafted by his hands.

“I built those small boats they used to build when the war was over. They used them for sponging and fishing to help the poor people. They would agree on a payment plan with the government until it was paid off. People used to sponge and fish,” said Laurin. “Now the residents focus more on regatta than fishing and sponging.”

The boat building industry today is not as active as before. Although it can be lucrative, Mark said there are high costs involved. Most of the raw materials are imported from the United States, including the planks, keel and lead. The stem and ribs come from native Bahamian wood, said Mark.

“Sometimes I am building three at once and sometimes a year or two passes and there are no jobs. A boat is meant to last for over 20 years,” said Mark, and therefore much pride and care is put into the building process.