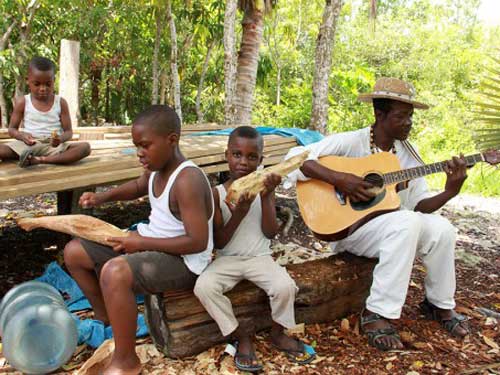 Every June, Andros becomes a buzzing centre of human activity as visitors flock to the islands for the annual Regatta and Crab Fest. For those who seek festivity and revelry, the star-power of these two popular events has eclipsed the true nature of Andros as a mecca for ecotourism.

Native Androsians, however, know the true value of their environment. So every year in October they celebrate their terrestrial and marine ecosystems, their wildlife and their relationship to the earth.

“When we think ecotourism we think Andros for a number of reasons,” said Peter Douglas, Executive Director at the Andros Conservancy and Trust (ANCAT).

“We have the third largest barrier reef in the world. The way the island is set up we have an ocean trench on one side – the Tongue of the Ocean – and a great shallow bank on the other side – the West Bank. Fifty percent of the land is wetlands and mangroves, so it has an incredible rate of marine production.”

Andros is the largest of all The Islands of The Bahamas. The entire archipelago contains roughly 5000 square miles of land: Andros accounts for 50 percent.

Over 80 percent of its natural environment is undisturbed, largely because of the small population of human inhabitants.

A vast expanse of underwater cave systems is another feature that makes Andros an ecotourism haven. Its Blue Holes National Park has the highest concentration of blue holes in the world. They look like deep swimming pools dotting the island from a bird’s eye view. Many of them are fit for swimming, although it goes against some of the local folklore.

“If you want a true eco-experience, (Andros) is it,” said one Floridian visitor. “I travelled with my dad and brother for a true boys’ escape. We are not the eco types at all. However, the staff and accommodations have us reconsidering our future trips. It was educational and rustic. I will be back.”

Sport fishing is the largest ecotourism activity on the island. It draws 70 percent of the tourists who flock from North America and Europe annually to see Andros’ vast shallow flats, the largest in the world.

“The bone fishing business is pretty high end and we use sustainable catch and release methods of fishing. It’s very low impact, while 80 percent of the money goes directly to Bahamians,” said Douglas.

Some local families have found generational success on the island through bone fishing. The legendary Charlie Smith, a bone fishing icon, has several sons working in the business, including Island Ambassador Andy Smith. They have all been beneficiaries of Andros’ natural resources, proving the value of ecotourism to the island. Andros is also a world class birding destination. There are over a 164 different species of resident birds, including migratory birds.

“We compare our birds to the tourists. We call our tourists snow birds, because birds like the Piping Plover, which was once threatened with extinction, move down here during the winter as a recreational retreat,” said Douglas.

“We have about 80 different species of migratory birds from North America and you will find them singing in the forest and enjoying themselves. It is a big market that is growing,” he said.

There have been recent sightings of the Andros Auriole, and other birds thought to be going extinct. The Piping Plover, which is still a threatened wetland bird, and the Kirkland Warbler live abundantly in Andros; they were found between Cargill Creek and Stanyard Creek in Central Andros.

“We have found that areas where casuarina trees are removed have a better beach head for the birds to migrate to. They come all the way from the East Coast of the United States. If they don’t find the proper locations because coastlines are being developed for tourism, then they die when they come,” said Douglas.

Culturally, Andros has the unique claim to fame of being one of the only islands with Seminole blood. The Native American tribe escaped Florida during the violent Seminole wars and built their own island sanctuary on the West Side of Andros.

In the legends of the Seminole people, there were tales of an island sanctuary to the South. Chief Billy Bowleg sought it out, rowing across the gulf in seven canoes with his people. Today, there are still black Seminole Indians in the Bahamas, residing in Red Bays, Andros.

Of all the reasons to visit Andros, Regatta and Crab Fest are no doubt motivations enough. However, much of the charm and beauty of Andros are in its exceptional natural surroundings. Andros is the perfect destination for eco travel: diving, fishing, snorkeling, hiking, bird watching, cave exploring, kayaking and camping amongst the fresh water lakes, blue holes, deserted beaches, vast wetlands and massive ocean.

By Noelle Nicolls and Nadine Thomas-Brown