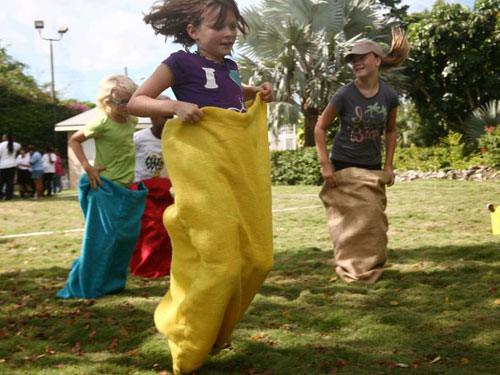 Among the invited guests on hand to support the event were Minister of Youth, Sports and Culture Daniel Johnson and Minister of Education Jerome Fitzgerald.

Again this year, the front lawn of the U.S. Ambassador’s residence was a buzz of activity as it was transformed into a mini “Camp Shriver,” where the athletes and volunteers spent most of the morning, enjoying food, fun, games, face painting and music.

Activities included bocce, tennis, the egg and spoon race, and the sack race. Once again the featured attraction was the dunk tank, where dozens of athletes lined up to take turns at attempts to “dunk” the Chargé and other invited guests.

Each year, EKS Day is celebrated globally to honor Mrs. Eunice Kennedy Shriver’s legacy of bringing people together with and without intellectual disabilities to participate in sports.  The day is set aside to promote volunteerism while paying tribute to Mrs. Shriver for her inspiration, impact and indomitable spirit.

The U.S. Embassy wishes to express appreciation to the management and staff of Marco’s Pizza, the primary sponsor of the annual EKS Day celebrations, for its standing partnership to provide complimentary pizzas which helps to make the annual event a success.

Top photo caption: The sack race was one of the featured events at EKS Day.