This Explains How Perry Christie Got Elected 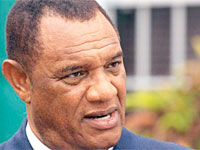 People wonder whether Prime Minister Perry Christie listens to himself or just runs his mouth without even thinking.

Recently, the befuddled PM expressed concern over his own personal safety as crime continues to rage out-of-control,  especially in his own constituency.

Mr Christie said that a recent government study of crime locations has revealed that, historically, the two most crime-riddled areas in New Providence are the constituencies of both National Security Minister Dr Bernard Nottage and himself.  These two constituencies played host to a large percentage of the country’s violent crime.

Doesn’t that say everything?

Finally, we understand how Perry Christie ever got re-elected.  His votes came mostly from criminals… people who knew that by getting rid of Hubert Ingraham and electing Mr Christie, they could get away with almost anything.

In a recent public address, Mr Christie was apparently confused when he said , “I spent my life in the criminal courts.”  The fact is… Mr Christie, who is a lawyer, has spent his entire life in politics.  Most people can’t remember Mr Christie ever even appearing in a criminal court.  Not in the last twenty years anyway.

“I also come from a constituency where I know young men who are charged with murder and two murders. People who you can go out in the streets and talk to on any given day, some of them are great young men who have made terrible mistakes,” PM Christie said.

Most Bahamians think  that committing a murder sort of takes one out of the “great young men” category.  And many regard murdering someone as more than just a “mistake”.

Perhaps Mr Christie’s perverted perspective is responsible for the rampant crime that is destroying our nation.

Christie also mentioned the failure of the police and the courts, “They have put young men out on bail for serious crimes, when there should have been a charge of murder, …we have no system in our country.”

Mr Christie was addressing the business community at the opening of the 2014 Bahamas Business Outlook conference.

“It makes no sense to put all this effort in the economy, to have the minority of young persons destroy our country,” he said.

An odd statement from the man who is supposed to be making sure that The Bahamas provides a good environment for business.

“We have positioned on a map every robbery of a tourist, every home invasion where it took place every shooting every murder every traffic accident and we have demonstrated that the preponderance of the shootings, and robberies are in two constituencies,” Mr Christie said. “One by the Minister of National Security and the other by the Prime Minister.

In other words, Christie’s entire political career has been fueled by criminals.