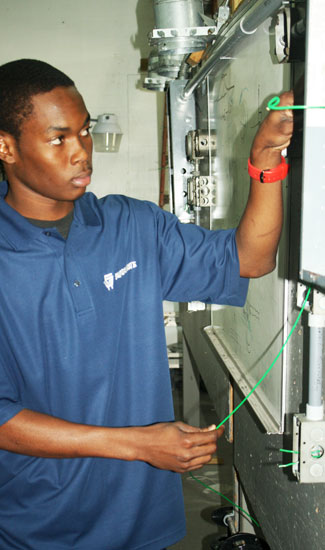 The two highest performing candidates in the 2013 Electrical Installation and Carpentry national exams are seeking to expand their knowledge and hone their skills at The Bahamas Technical and Vocational Institute (BTVI).

Lamaron Sweeting, a 2013 graduate of South Andros High was recognized by the government during its annual national examination awards, as having achieved the best results in the Bahamas General Certificate of Secondary Education (BGCSE) Electrical Installation exam.

Lamaron recently collected his acceptance letter to BTVI and is excited to begin his studies towards an Associate of Applied Science degree in Electrical Installation when summer classes begin on April 28th.

“It is important for me to attend BTVI to further my hands-on skills and to apply it to the world of work,” said the 17-year-old.

“I understand it and am able to apply it easily,” said the young man who wants to become an Electrical Engineer.  “The passion I have for the work makes me feel I’m doing it for fun.  Time doesn’t matter; at the end of the day, I can see what I’ve done,” he added. 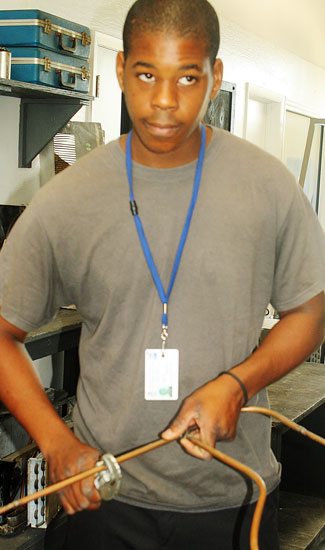 Meanwhile, Oscar has already been enrolled at BTVI for two semesters and although he is learning the intricacies of Heating, Ventilation and Air Conditioning (HVAC) he stated that carpentry comes natural to him.

“I like things that can be done with the wood – the many possibilities.  I make art out of wood,” said the 19-year-old who has built a computer desk, towel rack, wine rack and car speaker box.

Questioned as to how he achieved the best national results in carpentry, Oscar gave credit to his teacher Carl Curry, but also said, “I put in a little extra than the other guys.  It makes a difference.”

He also offered advice for the 2014 candidates: “Help others who are doing the exam.  You learn in the process. The more you do it, the better you get at it.”

BTVI’s Dean of Construction Trades, Alexander Darville said it is an honour to have Oscar at BTVI and Lamaron starting in a few weeks.  “It shows how students see BTVI.  We are attracting top students from the technical areas,” he stated.

Mr. Darville added that for many high school students, technical education is a first choice.  “We live in a technical world and BTVI is literally preparing its students for the world of work,” he said.

Captions:
Left: Lamaron Sweeting received the best results in the 2013 Electrical Installation BGCSE examination and will begin studies at BTVI in a few weeks.

Right: Oscar Saunders, a student of BTVI, received the best results in the 2013 BGCSE carpentry exam