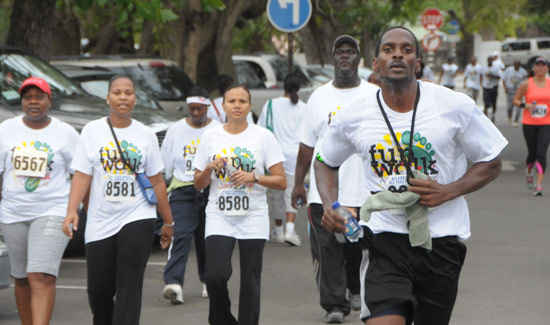 Oniel Williams, who has spent the last six months training in Kenya with Olympic champions and Mackey Williams, a runner who has been participating in marathons since 1986, were the first runner and walker to cross separate finish lines at Atlantic Medical’s 16th Annual Funwalk on Saturday.

The men were just two of 2,000 participants who turned out for the annual event, which brings awareness to chronic diseases like cancer and diabetes.

“I’ve pretty much spent the last few months of my life with some great competition,” said Oneil, who took part in the run – the first in Atlantic Medical’s Funwalk history.

“I came out here just for a practice run. It wasn’t really competition for me. From here, I will try to qualify for the Commonwealth Games. That’s really why I’m home. So I figured since I’m here, why not give back and train at the same time.”

Meantime, Mackey said the event was a great way for him to train for more competitive races.

“This race has become a part of my training,” said Mackey.

“I usually do long distance running. But I said I will take part in this just to support the people. It’s also to encourage others to know that their health is their wealth.”

The proceeds from the Funwalk go to the Cancer Society of The Bahamas and the Bahamas Diabetes Association.

Atlantic Medical’s Business Development Manager, Darren Bastian, who is also on the committee, said the yearly event continuously attracts participants eager to get involved in what he describes as a “truly worthy” cause.

“A lot of people in our country are affected by those two diseases, cancer and diabetes. So, it makes sense for us to support those two worthy charities. We’ve been doing it now for quite a while and over the time, through this event, we and corporate Bahamas have helped to donate hundreds of thousands of dollars to those charities. Atlantic Medical doesn’t keep a penny.”

Many professional athletes lined-up at Montagu Beach to pound the pavement.

Participants had a choice of two routes – one for competitive walkers and runners and another for those keen on walking for fun.

“When we first started this event, we had many people with extra large T-shirts, but today, years later, the shirts have gotten much, much smaller,” said Atlantic Medical General Manager, Lynda Gibson.

“That’s an indication that for a lot of people who have been walking with us, their lifestyle change has really improved their overall well being. This is the message we want to give to the Bahamian community.”

The Bahamas Telecommunications Company (BTC) had the most participants, followed by Scotiabank.

Bahamas Electricity Corporation (BEC) General Manager Kevin Basden was one of the many participants from corporate Bahamas.

“This is something I definitely think we need more of in terms of the health and wellness of the nation,” he said.

“You’re looking at two diseases which compact the community at large. I think they are great charities, in terms of donations. But the bigger picture is that we get the message across of the health and wellness of our nation, in terms of diet and exercise.”

Winning the ‘Over 60’ women’s walk category was Delora Moncur of Scotiabank, who said she jogs just about every day and believes that getting older doesn’t necessarily mean you have to slow down.

“For me, it’s always a joy,” she said. “I’m not in a competition. I do it for myself. It’s all about a healthy lifestyle for me. I enjoy looking and feeling good. Once we live life healthy, we live much longer and we won’t have the problems of all the diseases that we experience if we would eat properly and exercise like we should.”

Atlantic Medical is one of the leading insurance agencies in the country.