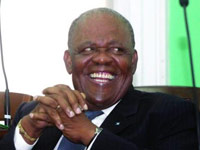 The Guardian’s Managing Editor Candia Dames is a very senior journalist on the Bahamian landscape so we must assume that she has interacted with former Prime Minister Hubert Ingraham on many occasions.

She would know that the former prime minister is a thoughtful man, not given to making decisions with national implications on flimsy, unsound ‘stories’.

That being the case, I wonder whether Dames really believes that anyone would be so silly as to present Ingraham with a report, from which he was expected to make serious decisions on the legalization of gaming and the taxing of web shops, which alleged that the numbers business in The Bahamas is divided among numbers men and their organizations as follows:

A number of other “fringe groups” also control additional percentages of the numbers business.

There is only 100 percent of any whole. It is impossible to divide a whole into percentages that total more than 100. The percentages reported in Dames’ article exceed 100 percent, indeed they exceed 175 percent!

Dames’ story alleges that the report was compiled by the police. It appears that the primary source of information was the exaggerated boasts of individuals engaged in unlawful activity in our country.

From her story, it appears that the late financial secretary, Ehurd Cunningham, was very much involved in the matter. Dames might also comment on that. I have heard it said that Cunningham was a proponent of regularizing web shops operators in The Bahamas. He is said to have believed that the numbers businesses could serve as an important new source of government revenue if brought into the legitimate economy.

But Cunningham was an intelligent man. He knew Ingraham well, both personally and professionally. I would hazard a guess that he was smart enough not to present an unprofessional report to the former prime minister as a basis on which he and his government could make a decision on regulating the numbers business in The Bahamas.

What is a matter of record, and what Dames can verify from the records of the House of Assembly, is exactly what the former prime minister had to say about the numbers business in The Bahamas. As I recall it, speaking on the floor of the House of Assembly, Ingraham said that if the police could not enforce the law which prohibited the unlawful sale of numbers in The Bahamas, the government would have to do something about regulating the business.

I believe it was after that time that the police successfully prosecuted and won a conviction against a numbers boss in the courts. Aside from this reality and fact, Dames now seeks to convince the Bahamian public that the police delivered a report to the FNM government saying that they could not stop the numbers men under the existing laws. What a contradiction!

Subsequent to his first remarks on the illegal sale of numbers on the floor of the House of Assembly, Ingraham returned to the subject and advised that having met with a number of church leaders, and most particularly with Anglican Bishop Laish Boyd, his government had determined not to proceed with any proposal to regularize numbers in The Bahamas. He further advised that if returned to office following the 2012 general elections, his government would seek the views of the Bahamian electorate prior to moving to regulate numbers in The Bahamas. Ingraham came to office committed to government in the sunshine with an unwavering dedication to transparency and accountability.

Dames appears to want to suggest that Ingraham met with the numbers men behind closed doors. The former prime minister does not go that way and I believe that Dames knows that. He did not meet with any numbers man and he has said as much on more than one occasion before and since the last general election.

The numbers men have been and are reportedly in continuing consultation and negotiations with the present PLP government. They began their consultations before the elections when the PLP were still in opposition.

What is clear from information available to the public is that the last FNM government considered and determined not to proceed with regularizing and taxing the numbers business largely because of the position of church leaders.

What is also clear is that under existing law, the police can and have arrested and successfully prosecuted and convicted individuals illegally engaged in the sale of numbers in The Bahamas.

I have noticed a slant in Dames’ reporting and opinion pieces over the past year that all seem meant to provoke some commentary by the former prime minister, drawing him back into national discourse.

Ingraham is reputed to be a great fisherman. I suspect he understands that Dames is seeking to ‘chum the waters’ hoping to provoke a response from him and hence create news. I see though that the former prime minister has studiously refused to take her bait. I can just imagine his hearty laugh as he read this most recent ridiculously transparent effort to embroil him.