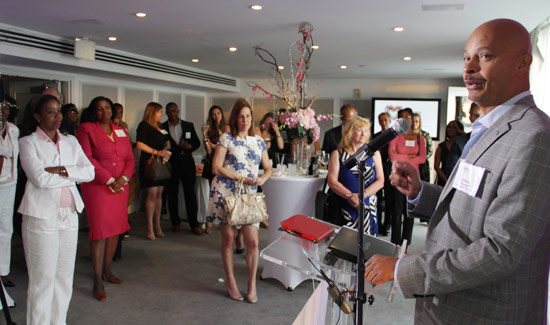 Journalists from throughout South Florida received an update on the Ministry of Tourism’s 16 Islands Wedding Invitation, which was launched with similar media focus in New York on February 14. The initiative invites engaged couples in the continental United States to enter the competition to win a wedding on an island in The Bahamas. When the competition ends on June 13, 16 couples will be chosen to marry on 16 islands, all at 16:00 (4pm) on January 16, 2015.

“We have received entries from all 50 US states,” Deputy Director General Ellison “Tommy” Thompson said. “This underscores the interest in this initiative. There is widespread excitement about this.”

Mr. Thompson also revealed that already more than 2,300 couples have entered the competition. To enter, they must research various islands of The Bahamas and explain in writing or in a video presentation why they should be chosen to be married in a dream wedding ceremony in The Bahamas.

Those entering the competition ask for their wedding to take place on specific islands. The competition’s most requested islands so far are Nassau, Paradise Island and the Abacos.

After the June 13 deadline, the public will vote on the entries. The couples who receive the most online votes will move on to a round of judging by a panel of judges who will determine the winners.