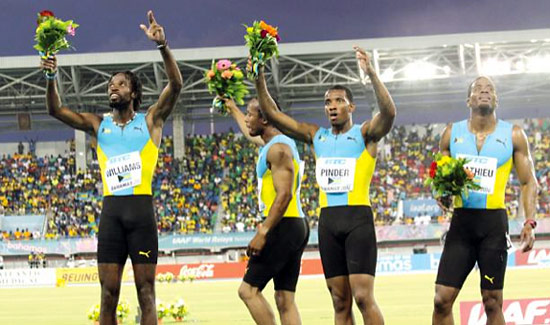 The Bahamas walked away with one medal in the IAAF Relays this weekend with a silver in the men’s 4×400 meter (m) relay.

The team had to do without the services of Ramon Miller in the final, but LaToy Williams, Demetrius Pinder, Chris Brown, and Michael Mathieu, in that order, ran 2:57.59 for the second place finish.

The new Thomas A. Robinson National Stadium was buzzing with excitement in anticipation of gold again, like they did at the 2012 London Olympics and again at the Penn Relays this year, but it would be a LaShawn Merritt-led United States team that would dash the hopes of thousands of Bahamians who showed up last night.

In addition to the silver in the men’s 4x400m, The Bahamas’ men’s 4x200m relay squad set a new national record in advancing to the final, and the women’s 4x200m relay team also ran a new national record in finishing fourth in the final. But this past weekend was all about The Bahamas’ ability to host a world-class caliber meet — and the country pulled it off.

It was the first ever International Association of Athletics Federation’s (IAAF) World Relay Championships, the first global track meet ever held in The Bahamas, and undoubtedly the biggest and most intense sports competition ever held in the country.

Hotels were filled to capacity and local businesses thrived as more than 1,000 visitors graced these shores.

Now it appears that all signs are positive heading into 2015. Apparently, when The Bahamas won the bid for 2014, it was contingent on the country hosting in 2015 as well.

“For the first time out, we have been able to successfully host the event without any major hiccups, and that bodes well for 2015,” said Managing Director of the Local Organizing Committee (LOC) for the World Relays Lionel Haven last night.

“Satisfaction to me means that you are getting the job done efficiently and effectively. That didn’t happen, and I kind of knew in advance that it would have been difficult for that to happen because we didn’t have a template to work from.

“For the most part, we were trying to imagine the dangers that we would face. We were faced with a very difficult uphill battle. We have that experience now, and that tells us that if the same people are involved for 2015, the level of this meet would certainly improve.”

Thousands of spectators packed the Thomas A. Robinson National Stadium over the course of the two days of competition. There were still quite a few empty seats, but it is understood that the LOC experienced some challenges with the online ticket system.

“Before this event, we had never thrown an international meet and an event of this magnitude before, so we knew that we would face some challenges, and we surely did,” said Haven.

“When you look at the number of visitors here alone, we had to deal with people from 42 different countries, which means we had to engage ourselves in some governmental discussions as it relates to visas.

“The final confirmation for teams to submit their final rosters was May 12. The event was scheduled for May 24, and teams would be arriving up until May 22, so that would have given us about 10 days to coordinate all of the areas which meant accommodations, accreditations and everything else. The Ministry of Foreign Affairs worked very well with us in getting the visas together, but it was still a very, very huge task.

“When you look at this stadium, this wasn’t equipped to handle an international track and field event. That had to be done, and that was a major undertaking. Transportation was a major task as well, in relation to both the athletes and the media, but I can say that we have been up to the challenge throughout the meet.”

Haven said as they look ahead to 2015, organizers are certainly expecting a grander event; not only is time on their side, but they now have the experience of organizing an IAAF world-class meet.

“For next year in particular, we would have a huge head-start in that we would have more time on our side in terms of planning and organization,” said Haven.

“For this meet, I got involved in September, and it took a while to get familiar with everything, so time really wasn’t on our side. Now, we have a template to work with, and we have the time. We have the whole year to work with, this time, and a lot of things are already in place.”

Everything might not have gone as expected, but few can argue that the meet itself, the caliber of athletes and indeed the performances, lived up to its billing.

The first came in the women’s 4×1,500m relay, as the Kenyan team of Mercy Cherono, Faith Chepngetich Kipyegon, Irene Jelagat and Hellen Jepkoech Obiri, ran 16:33.58 to obliterate the old record of 17:05.72 that was also set by Kenya, just last month.

The second world record came in the men’s 4x200m, as the Jamaican team of Nickel Ashmeade, Warren Weir, Jermaine Brown and Yohan Blake blazed around the track twice in 1:18.63, doing away with the former record of 1:18.68 that was run by the Santa Monica Track Club out of California 20 years ago.

On Sunday, it was the Kenyan men’s time to get in the record books. The quartet of Collins Cheboi, Silas Kiplagat, James Kiplagat Magut and Asbel Kiprop, in that order, ran 14:22.22 to smash their own world record of 14:36.23 that was run five years ago.

As for the meet itself, it couldn’t be complete without the sweet sounds of Junkanoo music. A 100-member joint Junkanoo group entertained the crowd in the opening ceremony on Saturday, during the distance relay races, and again last night as the two-day meet wrapped up.

Also, over the course of the two days, there were performances by the police and Defence Force bands, as well as The Bahamas All-Stars Band.

At the conclusion last night, it was a festive time for the athletes, the coaches and officials, the IAAF and indeed the people of The Bahamas — particularly the thousands in attendance who roared and cheered on the Bahamian athletes, regardless of time or position.