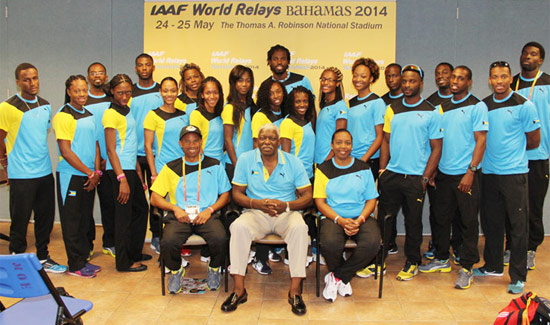 On Wednesday, members of Team Bahamas attended a press briefing to be officially introduced.

“We put together the best possible persons that are available. I would not say we have a weakness, we may not be as strong in some areas due to injuries to some of our key athletes that will have an impact on one or two of the relays, but nevertheless we are going to put together the best combination to compete,” national team head coach Fritz Grant said.

The team members have been engaged in training camp since Saturday.

“We are focused, everybody is locked in and everybody has a role to play. Based on what I have seen in the training camps we are running extremely well, it’s just a matter of putting it all together,” Grant said.

Grant added that the Bahamas Association of Athletic Associations (BAAA) established the criteria for the team and he believes the best athletes capable of competing have been put together.

“In all these events I think we are going to be very, very competitive and we are going to do our endeavor best. We just have to be strong and continue to focus on the task at hand. I must say that the athletes are eager, the training camp has been going extremely well. We are looking forward to going out there and putting on a good show for the Bahamian public,” Coach Grant said.

Grant said the team continues to deal with several minor injuries, but the team still boasts a number of strengths.

“The men’s 4×400 meters (m) is obviously one of the favorite’s moving forward. The women’s 4x200m still has a good chance even though we are missing one person, nevertheless we are looking forward to putting a very good team together. Both the women’s and the men’s 4x100m have a very good chance of getting to the final, but of course with all these sprint relays you can have the foot speed, but you have to pay attention to detail in the exchange zone. We are going to see Team Bahamas really execute those exchanges. Once we do that and get in the finals, anything can happen then,” he said.

Grant said Team Bahamas will have best persons in the best positions to maximize its full potential.

As a result of a nagging hamstring injury Miller, was forced to withdraw from the meet, just three days prior to competition. Veteran sprinters Debbie Ferguson-McKenzie and Derrick Atkins also withdrew because of injuries.

“Injuries are a habit of our trade and often times they come at an inopportune time. Unfortunately we cannot allow injuries to members of our team to deter us from our stated goals and objectives,” said BAAA president and deputy chairman of the Local Organizing Committee(LOC) for the IAAF World Relays Bahamas 2014, Mike Sands. “At the end of the day we cannot dwell on what could have been. We are faced with a challenge over the next few hours to face the world, and so we will focus our attention to performing to the best of our ability under any circumstances.”

The team is coached by Grant, Rupert Gardiner, Roger Charlton and Cherish Hollingsworth.

The upcoming IAAF World Relays Bahamas 2014 will take place at the Thomas A. Robinson National Stadium on May 24th & May 25th.

The Bahamas is the first country to host the IAAF World Championships. The event will be held at the Thomas A. Robinson Stadium which has a seating capacity of 15,000.

This event will bring together the best athletes in the world. It is expected that most of the sprint and middle distance medalists from the 2012 Olympic Games and the 2013 IAAF World Championships will be present.

The IAAF World Relays will be held in Nassau for two consecutive years. The first edition will take place on May 24th and 25th, 2014.

The IAAF World Relays is the biggest sporting event to be held in The Bahamas. The event is under the aegis of the International Association of Athletics Federation.

The event will bring together 700 athletes and 300 team officials from 40 countries.

The 2014 IAAF World Relays will serve as a qualifying competition for the 2015 IAAF World Championships.

Each day prior to the IAAF World Relays, a Junior program with athletes from The Bahamas will be held.

It is expected that the Bahamas will have unprecedented international sports television coverage for this event with millions of viewers. The event will be aired live by The Broadcasting Corporation of the Bahamas.(ZNS)

National Television advertising promotion for the event was launched during the IAAF World Championships in Moscow on August 10th, 2013.

Hosting the event will require more than 500 event volunteers and more than 100 Organizing Committee members and a part/full-time staff of over 25.