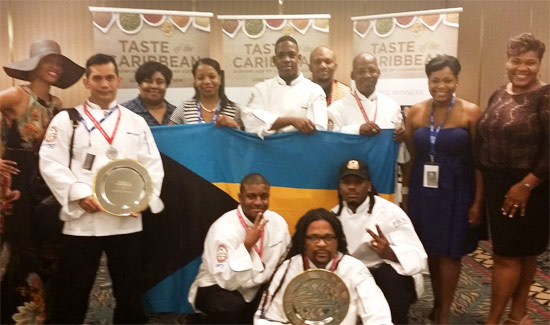 Despite a rigorous schedule of events, logistical complications, and intense competition from top rival chefs, the Bahamas Team proved once again that the Bahamian Culinary Mastery reigns among the best in the region.  This year’s team was a mixture of several veterans, including co-captains Chefs Sheldon Tracy Sweeting and Michael Adderley, along with a younger group of up and coming chefs.
National Culinary Team of the Bahamas Shines at Taste of the Caribbean

Leading the individual honours was Chef Sheldon Tracy Sweeting who for the second consecutive year was selected as the Caribbean’s Pastry Chef of the Year.  Chef Sweeting has won that distinction in three of the past nine years and is a three-time entry into the Caribbean Chef’s Hall of Fame, something which very few chefs have ever achieved.

Chef Sweeting captured gold medals in both the pastry competition and the cheesecake competition.

Richmond Fowler from Albany was competing for the first time in the seafood category and was awarded a silver medal.   Silver medals were also awarded to Chef Charon McKenzie from the Lyford Cay Club in the beef category, and Jamal Small from the One and Only Ocean Club in the Chef of the Year category.

Representing the Junior Chef category was Dwayne Sinclair, a student at the Lincoln Culinary Institute, who received a silver medal.

“The National Culinary Team have proven to be consummate Bahamian Culinary Ambassadors for our country” according to Bahamas Hotel and Tourism Association President Stuart Bowe.

“They have illustrated what it means to be team players and competitors of the highest rank; skillful, professional, dedicated and most importantly equipped with the ethos, and ethics required to win with eloquence and elegance.  They have made the Bahamas proud, not only as chefs, but as Bahamians” adds Bowe.

The Team’s participation in this year’s competition would not have been possible without the leadership and participation of the Bahamas Hotel and Tourism Association, who drummed up sponsor support, leveraged partner relations, provided financial support and managed logistics.

“It was a team effort” according to BHTA Executive Vice President Suzanne Pattusch who commended the BHTA staff members, including the Team Administrator, Charlotte Knowles Thompson who administrated every aspect of the teams participation from preparation to the final competition. She also applauded the team’s Co-Managers Sheldon Tracey Sweeting and Michael Adderley, seasoned professional chefs, for their tremendous support.

Public sector support was also provided by the Ministry of Tourism, with the Ministry’s Communication Department, in particular Kendea Smith, and the members of the Plantation Office lending invaluable support.

Photo Caption:  Bahamas National Culinary Team Members showcase the national colors and their awards following this year’s Taste of the Caribbean competition.  Joining the team members are representatives from the Bahamas Hotel and Tourism Association and the Ministry of Tourism.