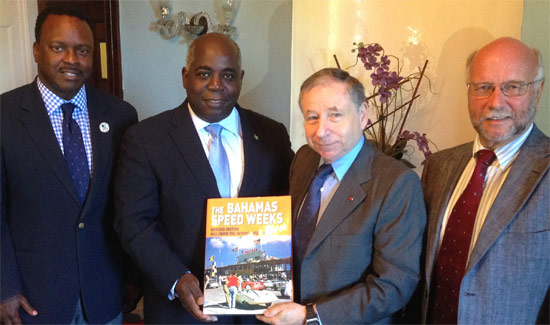 The Minister of Youth, Sports and Culture Dr. Daniel Johnson, used the first ever meeting of the FIA (Federation Internationale de l’Automobile) in The Bahamas this week as a platform to make the announcement of the $9 million complex that will serve as a multipurpose center, providing a facility for safe driving training for police, security and ambulance operators, recreational and racing cycling, recreational and competitive cycling, motorcycle sports, karting, even musical concerts and other events that create local and visitor attractions and opportunities.

Those early morning meetings were followed by site visits and a tour of Graycliff’s new Bahamas Historic Museum on West Hill Street, rich with racing memorabilia including a leather jacket worn during Nassau Race Week more than 50 years ago by racing legend Sir Stirling Moss. Later in the day, the delegation paid a courtesy call on Prime Minister Perry Christie and other members of Cabinet at the Cabinet office.

But it was Johnson who made the announcement that drew applause and smiles, moving Bahamas Speed Week Revival from an event that drew dozens and pumped $1 million a year into the local economy to one that is likely to draw thousands and pump multimillions into a growing sports tourism phenomenon that is proving among the most successful forms of tourism.

“The motorsports complex is an investment in the economy and in the Bahamian people. This is an investment that will continue to pay for itself. Stimulating the domestic economy is what sports tourism does. It is proving a great boost to the local economy,” said Johnson, citing the LPGA tour which, he said, has signed on for another five years, NCAA tournaments, and college football. The “Battle 4 Atlantis” hoops tourney set for November is already sold out, he said, and is expected to fill 15,000 rooms at Atlantis. Johnson noted The Bahamas is partnering with the best brands in the world to foster strong sports tourism.

Johnson said two locations for the motorsports complex were being considered and while construction will be government funded, the facility would have to sustain itself financially through private events, usage and an authority type of management.

Both Johnson and the FIA/NACAM Task Force Director, President of Bahamas Motor Sports Association, and Chairman of Bahamas Speed Week Revival David McLaughlin said the venue must be of a high enough standard to host signature events and could possibly be the site of the first successful Formula E racing (electric and emission free vehicle racing), an idea that intrigued Johnson.

“Please note that the Minister has announced that this will be the Circuit of The Bahamas, not just a track but a circuit,” said McLaughlin. “That is a huge deal. We welcome the news and believe that such a complex will be a sustainable and cost effective investment that will bring real auto racing back to The Bahamas.”

President of the FIA Jean Todt said he is excited about the project on two levels – the first for racing, but just as importantly using the facility to help create a “zero fatality” reality through the FIA’s road safety program that he said has saved more than two millions lives worldwide. To the FIA, the facility has the capability of creating a center for motor safety education. Some 55 traffic-related fatalities were recorded in The Bahamas in 2013, and three on the first day of 2014 alone. At a brief introduction to the Minister of Transport & Aviation Glenys Hanna-Martin later in the day, Todt promised he could bring the zero fatality goal to The Bahamas. Hanna-Martin looked him in the eye, smiled and said it was a tough call, but a goal worth pursuing.

Caption: Investment – Recognizing the value that motor sports has brought to venues from Indianapolis to Monte Carlo, the Bahamas government announced this week it will build a multi-purpose motorsports complex by 2016. The circuit will be used for police, security, ambulance and other driver training, motorcycles, cycling and numerous events including providing a circuit-approved racing oval for the iconic Bahamas Speed Week Revival. Pictured l-r, Dr. Daniel Johnson, Minister of Youth, Sports & Culture, Philip Davis, Deputy Prime Minister and Minister of Works and Urban Development, Jean Todt, President FIA, the worldwide governing body of motorsports, and David McLaughlin, race event organizer, chairman of Bahamas Speed Week Revival and the first FIA director appointed to represent the Caribbean and Bahamas. (Photo courtesy of Graycliff)