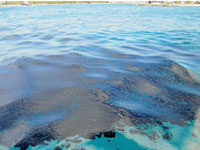 Over the past 15 years, oil and other substances have seeped into the ocean in part due to discharged material at the Bahamas Electricity Corporation’s (BEC) Clifton Pier Power Station, according to BEC Assistant General Manager Shevonn Cambridge.

Oil collecting into old disused trenches on the property has resulted in oil spilling into the sea on previous occasions.

“While BEC has spearheaded the efforts [of] maintaining and recovering the product that is out there, it has never really conclusively decided or discovered that it was all sourced from BEC,” Cambridge said on Thursday.

“Basically they did some analysis of the product a number of years ago and actually found there were products that were in this product going out to sea that BEC doesn’t even store or use.”

He said the problem is monitored on a daily basis to immediately act in the event of any oil seeping from the facility to prevent it going out to sea.

The corporation is in discussions with another service provider to install more “permanent measures” to capture and retain any oil product that seeps from BEC’s compound.

He said there are three alternatives being considered but none are inexpensive to undertake.

He was unable to say how much oil has spilled over that period of time or within the last year.

“We want to establish a new [database] so we can compare that to the progression or reduction from the last set of tests that were done in that area,” Cambridge said.

He insisted BEC has implemented an action plan to address the problem over the years, but incremental weather and the compound’s structure contribute to the ongoing problem.

Environmentalist Robert Kennedy Jr, who has been outspoken on the issue for some time, told those in attendance at a College of The Bahamas lecture last month that several reefs in the Clifton Pier area have been nearly destroyed by repeated oil spills from BEC’s Clifton Pier plant.