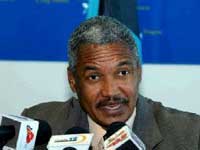 The government intends to reconnect the electricity supplies of more than 7,000 households without power by June 1, Bahamas Electricity Corporation (BEC) Chairman Leslie Miller has revealed.

Miller said the corporation’s records indicate that the majority of those customers have bills under $2,000.

He said after meetings with Minister of Works Philip Brave Davis and officials in BEC’s Consumer Affairs Division a plan is being implemented to assist Bahamians get back on the grid.

“I have given them a mandate as was enunciated by our minister, Philip Brave Davis, that it is the government’s wish and his personal wish that no Bahamian be without electricity,” Miller said.

“We are going to go on a very intensive public relations program to get every single Bahamian, who is right now without electricity, to be on.

“We are hoping to do that during the month of May. Come June 1, if not all Bahamians, the majority of them will be on with a scheme they can afford.”

All customers on the new plan must keep up with the future bills once connected, and could even receive a five to 10 percent reduction on the outstanding bill, Miller said.

A customer with a bill of $3,000 or less will be expected to pay a “fair amount”, while a customer with a bill of $4,000 must pay 25 percent.
Miller previously revealed that around half of BEC’s customers who signed up for the former administration’s electricity assistance program ahead of the 2012 general election did not need to utilize it to the extent they did.

The program, which was intended to provide relief and generate revenue from delinquent and returning customers, had the opposite effect because many households that could afford their bills, spread their payments out over the full length of the program, Miller said.

More than 5,000 households that were without electricity had their supply restored after registering for the up to three-year plan, which was launched on February 9 last year.

Reconnection fees were also waived to the tune of $80,000.

The Progressive Liberal Party (PLP) has suggested that the last BEC initiative was a Free National Movement (FNM) election ploy.

Miller recently said management was in the process of restructuring that program, shifting those who can afford to pay more, on a more “restricted program”.

“Those less fortunate may still go on the three-year plan or that may be really reconfigured for a 24-month period,” Miller said in March.

“Those who can afford to pay will probably go on a 12 to 18-month [payment] period to enable them to pay their bills at BEC.”

Asked how the financially strapped corporation could afford to supply power to thousands of additional customers without them fully paying their bills, Miller said, “If you’re off, you’re not paying anything anyway.

“We are trying to incentivize them to come in and sit with our personnel to pay their bills in whatever manner they can that is reasonable.”

He insisted on Thursday that the new assistance program does not apply to commercial customers, whom he said owe BEC in excess of $50 million.

He revealed that one business owes the corporation $10 million.