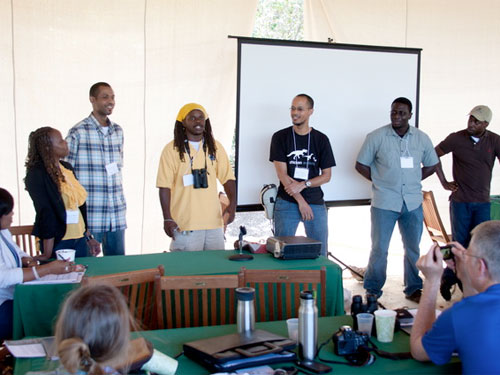 ELEUTHERA, Bahamas — Relatively unknown to many Bahamians are the many natural wonders of which our country can boast and which Bahamas National Trust (BNT) is mandated to preserve and protect.

One such marvel that BNT has dedicated history-making efforts to save is the Kirtland’s Warbler. This rare and endangered songbird annually migrates from Michigan in the United States to The Bahamas, where it spends seven months out of the year.

Vital to the gathering and the success of the overall conservation work was the participation of local college students who completed BNT’s Research and Training Programme headed by Eric Carey, the Trust’s Executive Director.  The training initiative is one of the major planks in the Trust’s conservation plan to raise awareness generally and prime Bahamians for leadership in the preservation and protection of The Bahamas’ natural heritage.

“The Bahamas are absolutely crucial to the survival of the Kirtland’s Warblers,” said Joe Wunderle, Research Wildlife biologist who joined the programme near its inception.  Mr Wunderle had high praise for BNT’s contributions in this regard.

“Their biology and behaviour was poorly known before this project, but Bahamas National Trust helped us carry out the conservation of this endangered migratory species that is unique to the Bahamas, where it spends more than half the year, and nowhere else.”

Ewert noted one of the most pleasing successes of the local Kirtland’s Warbler efforts. He revealed that just the week before the Eleuthera workshop opened, the conservationists had found an unprecedented number of Kirtland’s Warblers on the island of San Salvador. He said the group hoped that more findings would be made on the other islands in the central part of The Bahamas.

Student reaction to participation in the Kirtland’s Warbler endeavor has been highly enthusiastic and positive.

“My experience, as a student with the project was phenomenal,” said Keith Philippe, whom Eric Carey recruited.  Keith asserts, “It enabled me to do field-based scientific research, biological science wildlife, and it also enabled me to network with American scientists and get more direction from them in terms of what a career in wildlife biology would look like.”

Philippe maintained, “It steered, it provided vision, but then also a practical means of actually obtaining that vision”

As an added incentive for the Bahamian research interns, on completion of the training initiative, the students were all awarded scholarships, up to $30,000, to continue their undergraduate degree studies at notable universities in the US.

One-time student of the KWRP, Ingeria Miller, explains “The project revolutionized my life; I went on to Cornell University where I received my Bachelors degree in Natural Resources Management, Ecology, and Policy Analysis, and came home after and quickly found amazing work in my fields of expertise.”

Bahamas National Trust, with the able partnership of the Nature Conservancy, has scored this and a number of other accomplishments for the conservation and study of rare species, such as the Kirtland’s Warbler. Eric Carey notes that BNT is determined to continue the Kirtland’s Warbler initiative and develop more programmes to affect positive change in young Bahamians as regards environmental stewardship.