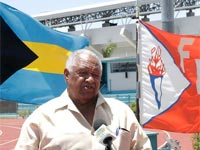 Former PLP Chairman Andrew “Dud” Maynard criticised his former party for failing to recognise the contributions of past politicians.

Mr Maynard affirmed his family’s alliance with the Free National Movement at a press conference announcing a sporting event to be held in his late son Charles Maynard’s honour.

Mr Maynard said: “I’m happy to be in a party that is like the party I was in for years, until it changed to the new PLP. I don’t mean when they announced the change, before that.

“[Charles] was a sincere and committed person, and that’s what I remember the original PLP as being. People like Cecil Wallace-Whitfield and Arthur Foulkes. You people are too young and you’re missing your life because you never heard Arthur Foulkes speak.

“It would make you cry when Arthur emphasized certain things,” he recalled, “that’s the sort of commitment and feeling we had for one another in those days, and I’m glad to see that the FNM is carrying that on.”

The FNM will host the memorial track and field classic next month as part of its annual Family Fun Day.

Participants will get an opportunity to race against party politicians, most notably the Leader Dr Hubert Minnis and Deputy Leader Loretta Butler-Turner, and play games named after historic public figures.

Dr Minnis said: “Even in Opposition, our party continues the challenge of strengthening democracy in our country. And so the fight goes on, but we will never forget what happened on that wonderful day in August 1992.