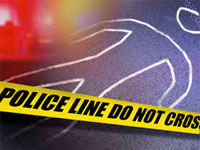 An autopsy conducted on the body of Michael Leinberg Piper, whose severed head was found on a street in the capital on Monday, showed there were no bullet or stab wounds and that the cause of death was decapitation.

Piper’s hands and feet were tied when the body was found.

The Police Social and Welfare Association (PSWA) said the killing was a gang’s attempt to flex its muscle in a terrible way and gangs in the country were becoming copycats of the South American style of warfare.

If you look at most of the high intensity drug related countries like Colombia and not too far from us, Venezuela, you will realise that most of the time persons are beheaded. It is a message that is sent from one gang or group to another, “ said PSWA vice president, Inspector Roger Alexander.

“It shows what we are capable of doing, so it is a message. They would also take a person from the opposite side of the fence and drop him in enemy territory or just his head.

“A lot of the times when drug transactions go round in these countries every effort is made to satisfy the drug lord and have the (head) of the person who robbed him…brought back,” Alexander said.

The senior police officer said that the killing of Piper could become a worrying trend and appealed to the authorities to pay more attention to protecting the maritime boundaries.