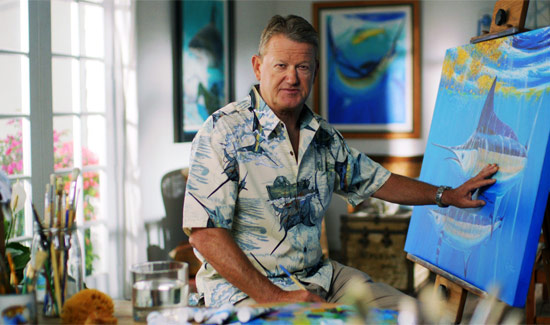 World renowned marine artist and conservationist Dr. Guy Harvey has declared Bimini an “environmental gem” and urged Bahamians to do everything they can to protect it.

His statement came as concerned citizens fretted over the future of Bimini’s marine ecosystem as the 450-foot long cutter suction dredger, the Niccolo Machiavelli, began excavating the sea floor to accommodate a cruise ship delivering passengers to a resort and casino. The dredging, say opponents, will wipe out some of the most spectacular coral reefs in the undersea world.

“Tracking research done by the Guy Harvey Ocean Foundation shows that The Bahamas plays an important role in the lifecycle of Atlantic Ocean and Caribbean shark populations,” said Harvey. “Specifically, the Bimini mangrove ecosystem provides vital habitat for these juvenile sharks, as well as many other valuable fish species. As overfishing continues to reduce many fish populations locally and globally, this habitat in Bimini becomes even more crucial to the conservation of these species. The islands of Bimini are an environmental gem and every step should be taken to conserve these resources.”

In 1999, he founded the Guy Harvey Research Institute at Nova’s Oceanographic Center in cooperation with Nova Southeastern University in Fort Lauderdale, Florida. The institute, which is funded in part by contributions from his charitable Guy Harvey Ocean Foundation, conducts research on the ecology, genetics, behavior, physiology, and evolution of fish. Areas of focus include shark and stingray ecology and conservation, and artificial reef design and monitoring.

His work in the field of game fish conservation led to Harvey’s inclusion in the International Game Fish Association Hall of Fame.

Malaysian-based Genting, which owns Resorts World Bimini (RWB), has said it needs to dredge the channel and build the pier to deliver up to 500,000 guests a year to the casino and hotel on the island that is now home to about 1,500 residents.

Concerned citizens who formed the Bimini Blue Coalition said they are worried about everything from destruction of their way of life to management of human waste, from lack of direct economic benefit to destruction of the reefs. Six of the world’s best, experts have said, lie in the path of the planned channel.

Despite mounting a legal challenge against the project, coalition members are now very concerned their efforts will be in vain as the dredging began on Thursday after lawyers for RWB produced what they purported to be permits from the Bahamas government – a claim the coalition has disputed.

The coalition is worried that the dredging will stir up so much silt and cause so much turbidity it will kill off Bimini’s rich fishing grounds that were immortalized in Ernest Hemingway’s Islands in the Stream.

Another of the great writer’s Bimini-inspired stories, The Old Man & the Sea, was the subject of Harvey’s first artistic exhibition 1985. The positive response led to his decision to paint full time and produce custom work for the wide range of Guy Harvey-branded merchandise so prized by sport-fishermen, divers and marine environment enthusiasts.

Caption: RARE JEWEL­ ­– Internationally acclaimed wildlife marine artist and conservationist Dr. Guy Harvey has weighed in on the controversial cruise ship terminal project on Bimini, which is now underway despite a judicial challenge. Harvey stressed that the island is an “environmental gem” and must be protected.