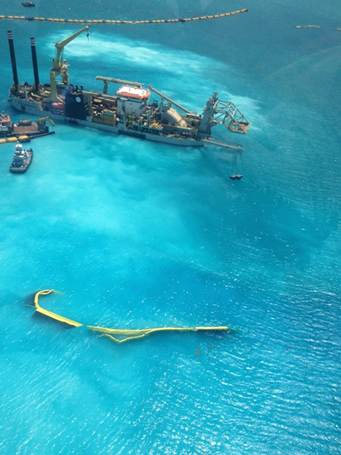 Ronald J. Coddington, P.E., of Civil Construction Technologies, was the latest in a stream of experts to add his voice to the growing chorus of those calling for a halt to what has been labelled environmentally “devastating” dredging that would have immediate and long-term consequences.

Resorts World Bimini commissioned the dredging as part of its plan to build a 1,000-foot pier and turning basin to accommodate cruise ships delivering up to 500,000 guests a year to its casino and hotel on the tiny island in the northern Bahamas. Bimini currently has a population of less than 2,000 and residents have worried that the transient population explosion will overrun its island and forever alter its generations-old way of life built in part on the pride of being surrounded by crystal clear turquoise seas home to 14 of the most treasured and valuable coral reefs in the world. Those reefs attract divers from all over pumping a reported $80 million a year into the local economy. Resorts World Bimini, owned by Malaysian-based Genting, has said its investment will add jobs for Biminites, but many have expressed fears of what else it will bring that the small island may not be able to handle. And in recent days, the dive industry has issued strong warnings about the impact of the dredging and urged that it be halted before it was too late.

Meantime, as cameras roll catching the action and shooting it out through social media and all over the internet, the 450-foot suction cutter called the Niccolo Machiavelli continued to churn up the waters with what Mr. Coddington said late today was inadequate and detached screening. Had that screening been installed completely surrounding the plume and the bottoms of the curtains weighted down, it could have mitigated against some of the turbidity caused by the stirring up of the waters that will kill reefs and the fish that depend on them for life.

“To me, it is hard to understand what the dredge company is attempting to accomplish with the discontinuous pieces of turbidity curtain, except maybe just show they have some on site,” said Mr. Coddington. “The turbidity control devices are not installed in accordance with Best Management Practices for erosion and sediment control.This is not an environmentally compatible operation in pristine waters like exist on the Bimini coast. It puts large amounts of sediment and silt into suspension without producing any fill excavation.”

According to Mr. Coddingrton, turbidity curtains must be deployed as a circumference around the point source of the plume. However, photographs show a discontinuous piece of floating curtain which he said “is absolutely worthless in its current state as it has no ability to contain the turbid water until settlement takes place.”

Steel piling should have been driven into the ocean floor to hold the curtains in place, he said, buoyed by bottom anchors or weights to keep the bottom of the curtain from being swept or pushed by currents.

“In none of the photos, is there any indication that turbidity curtains are being deployed to actually attempt to mitigate and contain turbidity,” he said.

Yesterday, California-based DEMA, the dive industry’s leading voice, called for The Bahamas government to consider halting the dredging, saying it was threatening “a recreational diving jewel.”

Located 48 miles from Florida, Bimini has long enjoyed a reputation among American DEMA members as a pristine diving and fishing location and annually attracts more than 3,000 diving visitors to businesses which belong to the BDA, as well as more than 3,700 annual diving visitors who arrive in private vessels, Ingram noted. Together, they generate more than $19 million a year for the economy of The Bahamas. Add shark and other deep sea fishing and estimates go as high as $80 million.

“These diving visitors are in addition to the thousands of visitors each year who make the short journey by air or boat to fish in Bimini’s unspoiled waters. These tourists currently spend an annual average of almost $2,800 each on Bimini, including spending at diving operations, hotels, restaurants and other facilities on the island,” said Tom Ingram, executive director of the Diving Equipment and Marketing Association (DEMA). And an article in the dredging industry’s trade journal stirred up additional concern.

Caption: Latest Concerns Over Bimini – A respected US-based ocean engineer with 35 years’ dredging experience said today Bimini’s world-renowned reefs and often photographed marine life will suffer immediate and long-term damage from the dredging taking place off the coast of the tiny island in the northern Bahamas. Threats, he said, could have been mitigated against by proper placement and securing of silt curtains. Instead, the curtains are scattered and not secured or weighted down at the bottom, allowing the stirred up sand to create turbidity, suffocating the reefs and fish that have not escaped.