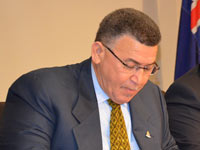 Lawmakers in the Cayman Islands passed a vote of no confidence on Tuesday afternoon, ousting Premier McKeeva Bush from office one week after his arrest in connection with a number of ongoing police investigations into alleged theft and corruption.

Members of the local parliament voted 11 to 3, with Bush himself abstaining, to remove him as the head of government in the British territory.

Bush, the longest-serving member of the Cayman Islands legislature, became premier in 2009, after previous terms in office as leader of government business.

He has denied any wrongdoing and strenuously resisted calls to resign following his arrest. However, after several days of silence on the matter, support within his own United Democratic Party (UDP) apparently began to erode over the weekend.

Five UDP members of parliament joined the opposition in calling for the no-confidence vote on Tuesday, which needed two-thirds support in the 15-member Legislative Assembly to force Bush from office.

Opposition leader Alden McLaughlin opened the debate by stating he was bringing the no confidence motion “with a heavy heart”.

“I am deeply saddened that we have come to this point,” he said. “I cannot say how disappointed I am that the premier has brought us to this point… the reality that faced with all of this, the premier will still cling … to the Office of Premier.”

“What has happened over the past week is certainly a breakdown that could have been avoided,” said Health Minister Mark Scotland in his contribution to the debate.

Bush, 57, was arrested early last Tuesday morning and detained in police custody in connection with a number of ongoing police investigations.

According to a press release issued by the Royal Cayman Islands Police Service (RCIPS), Bush was arrested on suspicion of theft in connection with the alleged misuse of a government credit card and breach of trust, abuse of office and conflict of interest, contrary to the Anti-Corruption Law 2008, in connection with the alleged importation of explosive substances without valid permits.

After being questioned for two days last week, Bush was placed on police bail until February 2013 to allow further investigations to take place in the Cayman Islands and elsewhere in connection with the allegations made against him, police said.

The RCIPS also confirmed that a considerable amount of property, including computer equipment, was seized during searches of Bush’s home.

Bush made it clear following his arrest he had no intention of resigning.

“I have done nothing wrong and I shall not be resigning as premier. I also wish to assure one and all that the government continues to operate as normal,” Bush said in a statement last Thursday.

Bush, however, made one such comment later the same day, when he accused Cayman Islands Governor Duncan Taylor of being his “enemy” and implied that his arrest was orchestrated by the British governor.

The governor’s office denied Bush’s accusations, saying that Governor Duncan Taylor had taken note of the comments made by Bush; in particular that the investigation was politically vindictive, and said there was absolutely no foundation to the allegation.