Credit Downgrade ‘A Wake Up Call’ 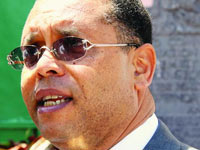 The recent downgrade of the country’s credit rating by Moody’s should be seen as a “wake up call” for the country, said Baha Mar’s Senior Vice President of Administration and External Relations Robert Sands yesterday.

Sands said while the news is serious he hopes the economy would be boosted once Baha Mar opens in late 2014.

“I think as a nation you have to be concerned about any reduction in the credit rating,” Sands told The Nassau Guardian.

“This is not just about Baha Mar, but the country as a whole, but I think it’s a wake up call for all of us to address this issue as a priority, make some structural adjustments, both from a fiscal and monetary policy going forward.”

The agency noted three factors for the downgrade: Limited growth prospects and weak recovery in tourism and construction; significant and rapid deterioration of the government’s balance sheet exacerbated by a low revenue base, and high and rising levels of debt and weakening of debt sustainability relative to other countries.

Despite the sober announcement, Sands said he believes the Christie administration will create policies necessary to buoy the economy.

“I think the government will put in place and begin to work to put in place the initiatives to begin to turn this around,” he said. “We are very hopeful though that an investment such as Baha Mar could be a catalyst to assist the government going forward once we are open with the creation of employment, the generation of new business, etc.

“[This] will be of tremendous benefit to The Bahamas going forward.”

Sands said the luxury development is still on target for a December 2014 finish.

“Construction is going very well,” he said. “We are meeting our timeframe. By February of next year we will celebrate our second anniversary and at that time we will do the capping off on all of the buildings, the roofs will be going on at that particular time. So the super structure would be totally out of the ground. We’ve done major work this past year.”

Construction work has begun on the resort’s Jack Nicklaus Signature golf course and should be completed by December 2013.

There are currently 800 Chinese construction workers on site with that number expected to reach its peak in May or June of 2013.

“But the peak will not go as high as was originally anticipated,” Sands added.

Sands said the project has created more than 1,850 jobs for Bahamians to date.