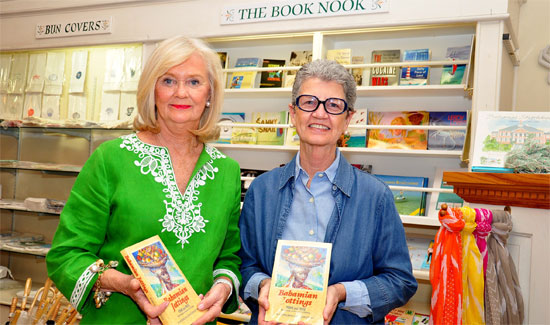 Inspiration for The Book Nook inside the shop that has become a staple in historic Nassau with its heavy wooden trim painted a deep forest green came from one of the owners finding a copy of a book of poetry and prose by the shop’s original owner, her late grandmother, Wilhelmina Johnstone. 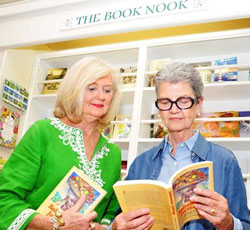 Bahamian Jottings had been out of print for some time, said Heather White, who with her sister-in-law Gloria Raine, has held on to the traditions of high quality goods in a street increasingly given over to t-shirts and souvenirs.

“When I started going through an old copy of the matriarch of the family’s writings, it was so moving,” said Mrs. White. “Her way of telling what it was like to live in The Bahamas when the hardships were as plentiful as the sun just gave us chills.”

White and Raine said it was like a light bulb.

“We had lamented the loss of a book store on Bay Street ever since the Island Shop closed,” said Mrs. Raine. “When we started going through this treasure, the book of poetry by the woman who opened the shop in the middle of the last century, it hit us, ‘Why not us? Why shouldn’t we be the new purveyor of books about The Bahamas on Bay Street?’ Once we set our minds to it, there was no stopping us and the project became so much fun.”

The women agreed instantly on one thing – The Book Nook, as they dubbed it, would handle books about The Bahamas, whether by Bahamians or others.

“There were more titles out there than we ever dreamed,” said Mrs. Raine. Among the best-sellers: Bahama Mama’s Cooking, Jewish Pirates of the Caribbean, Bahamas Sketchbook, A Serpent in Eden and The Story of The Bahamas.” More than 30 titles now take their place astride linen bun covers, bamboo sheets, fine scarves, dozens of styles of place mats and tablecloths, gifts for occasions from birthdays to anniversaries and a permanent display of Bahamian holiday ornaments.

On Sunday, April 13, The Linen Shop will officially celebrate its re-launch with a function at the shop in the afternoon. And, yes, Wilhelmina Johnstone’s Bahamian Jottings will be there for the event. The book that inspired the re-birth of one of Nassau’s oldest retail traditions has been re-printed.

BAHAMIAN BOOKS ARE BACK ON BAY – Books about Bahamian history, lore and more are back in historic Nassau, thanks to the opening of The Book Nook inside The Linen Shop. Creation of the reading corner was inspired by shop owners Gloria Raine, left, and Heather White, who started going through a copy of Bahamian Jottings, written by their late grandmother who opened the store, then called Johnstone’s, 68 years ago. They had the book reprinted in time for this Sunday’s formal re-launch and unveiling. (Photo by Derek Smith, Jr., for DPA)