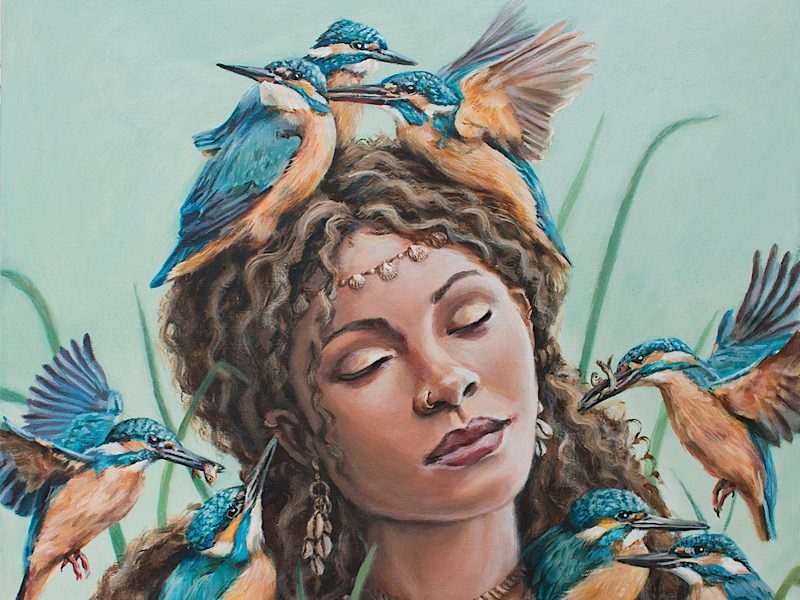 Some artists live to paint. Dyah Neilson lives amidst her paintings. To get to a drawer for a t-shirt, she has to shuffle past art supplies before she juggles canvases leaning up against the dresser. To climb into bed, she crawls over works in progress.

Dyah’s bedroom-aka-studio is her safe haven but the industrious artist who also holds a nearly full-time day job at Oasis furniture and décor store is bursting out with more work than she has space to contain and more desire to paint than she has hours in the day.

“I usually start in the late afternoon and work well into the evening, sometimes until 1 or 2 in the morning,” says the petite 25-year-old who looks like she would be as comfortable on a couch with a puppy as she would be beachcombing. She exudes the same almost ethereal quality that fills the canvases of her work, a juxtaposition between the real and the surreal.

In one large piece, a young man with long dreadlocks and eyes closed seems only mildly aware that he is holding a giant grouper while another is atop his head. The theme of animals imposing themselves, competing for attention, even dominating humans, is a main feature of many of her portraits.

Says Neilson “My work is creative portraits that combine animals and people, compositions where the person is the focus but the animal is used to symbolize different things throughout history, or culturally and spiritually. In a commissioned piece called Kingfisher, the prominent-beaked birds by the same name adorn a dark-skinned woman. We know little about her from the painting despite the intense detail showing thick, coiffed hair, a cowrie shell strand around her neck, strong breastbone structure. We sense an inner strength, but what we do know is about the birds that have chosen to land on her shoulders and over her head. The artist chose kingfishers because they are symbolic of prosperity, abundance, wealth and peace.

Although portraiture is her favourite, the young Bahamian artist who holds a Bachelors’ degree in Fine Arts from York University in Canada is equally comfortable with wildlife and historic sea life. Her depiction of sea turtles swimming is so lifelike you want to slide into the clear blue-green sea and swim with them, her grouper so real you are torn between wanting boiled fish and saving the species for another day. What seems different from the rest of her work, as if she lived a previous life in another era, is the body of work she calls seascapes. In that, she paints two-masted ketches, wooden hulls, rounded bow and stern like a double-ender, full sails but struggling, always a hint of trouble ahead.

Neilson started painting as a child.

“I never thought about it. There was never a moment that it was not part of my life,” she said. “I have proof from when I was in kindergarten.”

That’s when she wrote on a bear the teacher gave her to colour “I want to grow up to be an artist and be happy.” Her parents saw her interest and encouraged her, her dad creating a gallery wall to hang her pictures on. Her mother showed artistic promise, something she is just getting back to now after a decades-long break, and dad and sister both have a passion for photography.

Neilson studied with Sonya Isaacs and Kim Smith when she was young, did an internship at NAGB before leaving for college, had a successful one-woman show at Doongalik Studios and her work is in private collections from California to Canada.

In the twist of fate that she portrays with her acrylics, she reflects on the fact that she originally intended to study interior design.

“I love design and I worked at Restoration Hardware in Canada for a while,” she explains.

Now, she is the store manager at Oasis with unique, contemporary indoor furniture at Sandyport and an outdoor style location on East Shirley Street.

“It’s the best of both worlds,” says Neilson. “I am around beautiful things all day, the owner, Brooke Pyfrom encourages me to display my work and supports it, refusing to take any commission, and I am able to keep working more every evening at home.”

According to Pyfrom, blending a furniture, décor and gift store with art is natural.

“When what the eye sees brings a smile to your face, that’s what matters. It may come in the form of a beautiful hand-crafted table, the fragrance of a candle or a canvas that Dyah created. It’s all about hitting that certain happy place in your heart.,” says the proprietor.

The only problem for the artist herself is squeezing so much art energy into a day that holds only 24 hours and so many supplies into a narrow room built for sleeping. 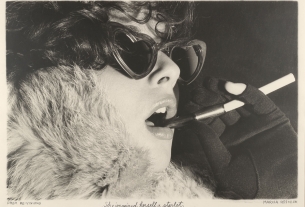 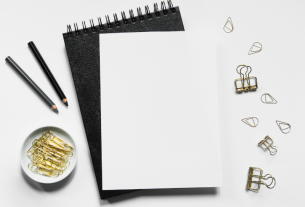 Bahamas Art: The Best Notebooks for Note-taking and Sketching 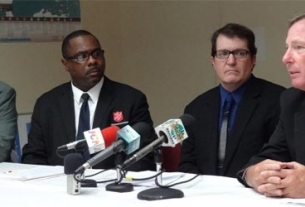