Here in the Bahamas, the government and several private companies and organizations have been giving quite a bit of lip service to the possibilities and promises of the Internet, particularly e-commerce. Despite all the spin, little progress has been made in the actual development of the Internet here.

Bahamians are, for the most part, missing the boat.

Nearly six years ago, when Bahamas B2B was first launched, there was plenty of excitement surrounding the development of a Bahamian e-society. The Bahamas Financial Servies Board (BFSB) formed several committees to examine the Internet’s potential for The Bahamian business community and to make a proposal to the government.

After two years of long time consuming and involved meetings it was determined by most of the people involved that they were wasting their time. Many stopped participating. By the time the proposal was completed the dot.com bubble had burst and the government basically shelved the initiative.

There was a feeble attempt to make it appear as if the Bahamas was keeping up with the rest of the world in the form of some legislation pertaining to “e-commerce”. Of the three bills that were proposed two were passed. The third bill, the most important one, dealing with electronic security and privacy was not. Hence, the concepts explored by the BFSB’s e-Commerce Working Group were not feasible to develop.

Because of this typically Bahamian dithering the Internet never really took off here in The Bahamas as it has in other developing nations around the globe.

Five years ago, The Bahamas was five years behind the ball, so to speak. Today, we are even further behind.

The government continues to talk and posture; various companies flirt with the possibilities offered by the Web; but there is no big cohesive national movement to get the Bahamas truly “online”. Other nations that have invested the time and money to educate their citizenry on such matters have reaped both economic and social rewards.

Here in The Bahamas, there are precious few online services offered to the public – rudimentary banking and crude online bill payments to name a few. Far too many Bahamian businesses still don’t even have websites. Some do not even use email (gasp). These are usually the harried people who rush around town whining that they never have enough time, yet are doing nothing to take advantage of the time-saving opportunities the Web presents.

In fact, the Internet is tremendously under-exploited by most Bahamian companies and individuals. Many Bahamians are not online, some of the ones that are, are clueless about the true potential the Internet offers. Some do not even know how to properly operate their computers, as evidenced by the tremendous number of hacked Bahamian computers, controlled by robots to send out spam.

Rather than leading the way, the government websites (except for the Ministry of Tourism’s sites) are among the worst designed and most dysfunctional sites in the country.

Bahamians also have their government to thank for the pitiful state of our telecommunications industry; monopolized by a company that should, long ago, have been privatized. Long distance rates are outrageous, yet the use of advanced Internet technology such as VOIP is illegal, presumably to keep the money-losing telephone company from losing more money.

Most big US-based online retailers will not ship to the Bahamas because of our reputation as a rouge nation. PayPal, the world’s largest web payment gateway, refuses to do business here because of our secret banking system, which attracts money launderers and financial services scum from around the world.

There was promise at the beginning. The FNM government, the guys who opened up broadcasting in the nation after years of government control and censorship, were gung-ho on the development of the Internet.

When Alvin Smith was in charge of BAIC, he worked with Bahamas B2B to create a little website that could have developed into an emerging force for raising Internet awareness among small Bahamian businesses.

However, before the site could even get going, the PLP came into power. Despite numerous offers of free web development from Bahamas B2B, the boys at BAIC have been so wrapped up in their own scandals that they have never even updated the existing pages. What a waste.

Despite the unfriendly environment, Bahamas B2B has continued to promote the web industry here in The Bahamas and will continue to do so.

Towards that goal, I will use this blog to examine some of the ways in which the Internet can benefit small businesses and explore methods which can assist companies and individuals in taking full advantage of the Web’s many powerful advantages to commerce. 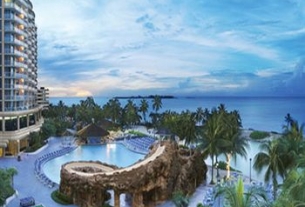 Are Red, Gold and Green Making You Blue?

The Undervalued Talent of Bahamian Artists