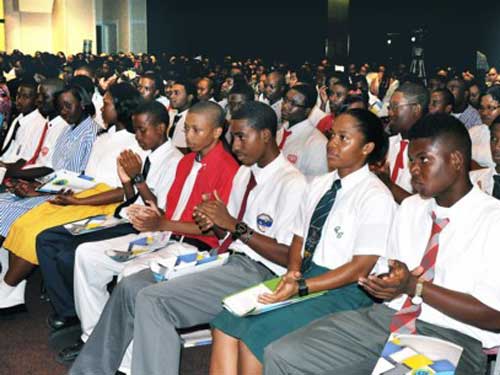 Minister of Education, Science and Technology, Jerome Fitzgerald told the 2013 Technical Cadet Corps Programme (TCCP) graduating class that the technical field is not a passive undertaking; it is for people who want to make a difference and change the world for the better.
“We are looking to you to use your God-given talents and the knowledge acquired from TCCP to find solutions to some of the technical and environmental issues that we face in The Bahamas. We are looking to you to help the corporations that may employ you to become efficient and cutting edge in their services and products,” Minister Fitzgerald stated.
Minister Fitzgerald, the keynote speaker at the TCCP told the graduates that the Government, through the Ministry of Education, Science and Technology has already implemented initiatives including the Investing in Students and Programmes for the Innovative Reform of Education or INSPIRE Career Path Academy at the C. C. Sweeting Senior High School and the Pre-Engineering Magnet Programme at the Anatol Rodgers High School.
The Career Path Academy will offer possible solutions to numerous socio-economic challenges facing the economy. It is the intention of the Government to have Career Path Academies in all senior high schools throughout The Bahamas. According to Minister Fitzgerald, the academies will prepare students for careers in masonry, carpentry, electrical and structural engineering and installation, graphic design, architectural drafting, sewing, software design, computer repair and installation, auto marine and aircraft mechanics.   This effort will complement the Technical Cadet Corps Programme and enable more students to leave school prepared for the job market and entrepreneurship.
Kerri Bascom of Queen’s College captured the title of 2013 Technical Cadet of the Year for the Ministry of Education, Science and Technology’s Technical Cadet Corps Programme (TCCP).   The academic standout who aspires to be a civil engineer was awarded a four-year scholarship by the Ministry of Education, Science and Technology which is tenable at The College of The Bahamas. Kerri received the majority of votes from her peers, lecturers and the sponsors’ panel to win the award over 87 other graduating cadets.
The modest Kerri stated that she is hoping to win another scholarship to attend Queen’s University in Canada to study Civil Engineering.  The outstanding Technical Cadet is also an accomplished artist, athlete and has won numerous awards for her works including the Department of Education 15th Annual Visual Arts Exhibition Outstanding Artist Award; RBC FINCO Summer Workshop awards for Painting and Drawing; the Governor’s Choice Award in the Central Bank Art Competition. She also won the Florida Caribbean Cruise Association (FCCA) Poster Competition two for consecutive years (2011 and 2012).
Kerri said that after college she plans to return home to develop the infrastructure of the Family Islands, particularly the roads and also build two storey buildings in those locations.
In addition to Kerri, several other students captured awards at the event.  They included Mckyle Grant of Mt. Carmel Preparatory who received the Bahamas Electricity Corporation General Manager’s Award; Trovayne Cargill, St. Augustine’s College; Bahamas Telecommunications General Manager Award; Alex Collie, St. Augustine’s College, Water and Sewerage General Manager Award and Archealous Hart,  Kingsway Academy, Broadcasting Corporation General Manager Award. Shadrick Farrington of Doris Johnson Senior School was awarded a scholarship to attend BTVI from the Ministry of Education, Science and Technology.
Executive Director of TCCP, Mr. Trevor Ferguson, announced at the graduation that discussions are being held for Rubis, formerly Texaco to become a sponsor of the programme. Additionally, the Ministry is also considering including an Aviation and Space Education component to the programme as early as September 2013. Mr. Ferguson said he was pleased to reveal that this year’s graduating class surpass last year’s achievements and that sponsors have agreed to raised the GPA for entrance into the programme from a minimum GPA of 2.5 to 2.75.
The Technical Cadet Corps Programme was started in 1990, by Dr. Bernard Nottage who was Minister of Education at the time. Participating agencies include the Bahamas Electricity Corporation, Bahamas Telecommunications Company, Broadcasting Corporation of The Bahamas and Water Sewerage Corporation. The programme is designed to expose interested students in high technology fields.
By: Val Gaitor 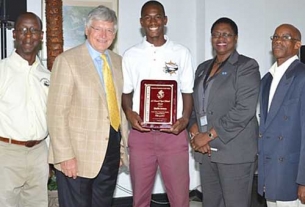 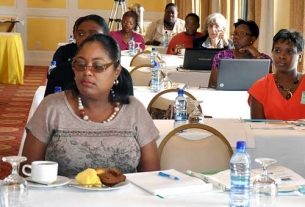