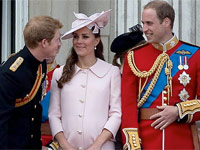 London (CNN) — With fanfare fit for a prince, Catherine, Duchess of Cambridge, and husband Prince William welcomed their first child Monday.
The baby boy was born at 4:24 p.m., weighing 8 pounds, 6 ounces. A name has not yet been announced for the child, who is third in line to the throne.
“Her Royal Highness and her child are both doing well,” read an official bulletin placed outside Buckingham Palace, where crowds erupted in cheers.
People from all over the world had gathered outside Buckingham Palace to await news of the birth. At least one group of well-wishers brought flowers, champagne and a card for the Duke and Duchess of Cambridge.
The fountains at Trafalgar Square were turned blue.
Prince William remained at Catherine’s side throughout the labor and the baby was born vaginally, not via a C-section, the source said.
The baby’s name may be announced when the family leaves the hospital, CNN’s Foster reported. Prince William’s name was announced a few days after birth, his brother Harry’s on departure from hospital.

Islands of The World Fashion Week