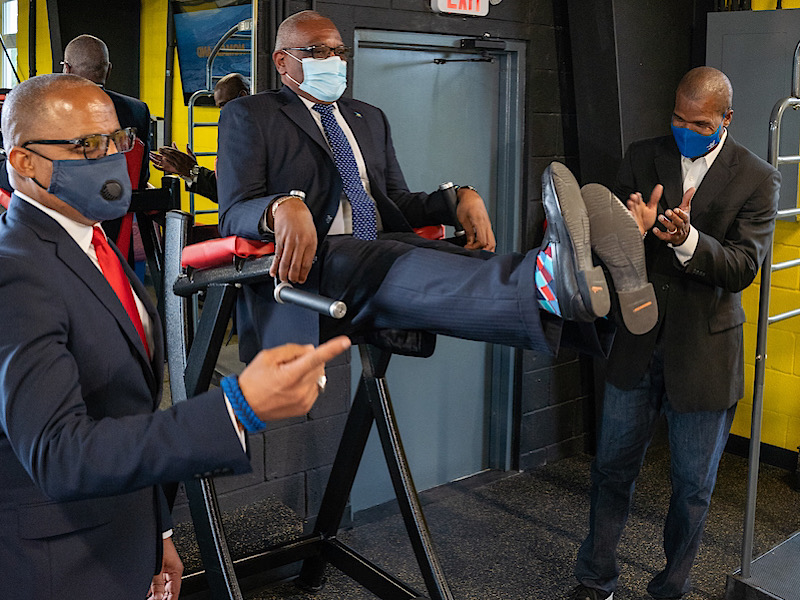 Prime Minister Hubert Minnis opened the MacFit 360 Fitness and Performance Centre on Cable Beach recently with an official ribbon-cutting and praise for what he called “a stunning 17,000 square foot facility unmatched by any in the region.”

Construction on the two-story fitness centre at the south end of Baha Mar Boulevard started before the COVID-19 pandemic turned the world upside down. The Prime Minister said he was concerned that the facility designed to cater to thousands of Baha Mar, Breezes, Sandals and other Cable Beach visitors and staff, as well as residents and professional and collegiate athletes would be derailed by the virus.

He was relieved, he said, when he saw that as soon as the ban on construction was lifted in May, owner Jimmy Mackey had his team back on the job.

“The result,” he said, “is that today we stand, with our masks on and socially distanced, at the entrance to a shining, stunning 17,000 square foot facility unlike any other in the region. In addition to the sheer size allowing for maximum safe distancing during workouts, MacFit 360 is equipped with a state-of- the-art ventilation system directly connected to the air conditioning system to reduce the risk of transmission and to comply with – and exceed– new international standards and protocols.”

“Fitness enthusiasts, I am sure, are far more interested in the equipment than in the ventilation but as a doctor as well as a prime minister whose single most important goal in the midst of a pandemic is to save the lives of Bahamians and residents, I am especially pleased to know of the behind-the-scenes investment in protective health measures and I wish to offer special congratulations to Mr. Mackey for investing not just in the shiny hardware that helps carve strong bodies but in the air that keeps those bodies safe.

“As for the equipment itself, I am advised that it is the industry platinum standard with brands like Life Fitness, Perform Better and Sorinex. I am further advised that because both MacFit360 locations in The Bahamas have the latest and finest equipment that Sorinex designs and manufactures, the company has MacFit360 featured prominently on its website, another feather in the cap for The Bahamas.”

That video, in fact, had launched the morning of the official opening and was playing as guests entered including the Minister of Health Renward Wells, Minister of National Security Marvin Dames, Leader of the Opposition Philip ‘Brave’ Davis, Baha Mar President Graeme Davis, numerous athletes including Golden Girl Pauline Davis- Thompson and Golden Knight Ramon Miller. Cyclist Stephen Holowesko was also in attendance along with Olympian track star and lifelong athletics supporter Mike Sands. Proprietor Jimmy Mackey’s high school coach, Norris Bain, shared his pride in seeing how far one of his students had risen and described it as a testament to the discipline of sports in a young man’s life.

In a personal tribute to his star student, Bain called Mackey a “proud son of the Bahamian soil who studied hard to learn his craft, traveled the world, showed other young people what discipline could do, and learned the economic power of sports.”

Mackey, in turn, thanked his mother, Maxine Gibson, for believing in and supporting him from the days the family lived in the most modest of conditions in the Kemp Road area.

“MacFit was a dream of mine since the day I started outdoor exercise on Malcolm Park with six people,” Mackey said. “Now we have a facility where we can attract and host the best athletes in the world and where we can create an environment where fitness thrives. Fitness is a lifestyle. It is not a weight loss program or an exercise program, it is a lifestyle and the pandemic we are going through now showed us it should be the number one thing we seek.”

Mackey also credited his wife who has been by his side for 10 years and the man he calls his brother, Dr. Kenneth Kemp, Bahamas Foot & Ankle President.

“He has guided me from Day One,” said Mackey.

This is the second MacFit on the island of New Providence with the eastern division located in the Harbour Bay Shopping Centre operating with more than 1,000 members.

Fitness guru Mackey trained in the U.S. and elsewhere before returning to The Bahamas four years ago and starting cross-fit and other classes, then building his own centres offering personal training, yoga, pilates, weight and strength training, general fitness and in the western facility, cryotherapy, a weightless gravity-free treadmill along with two full floors of world-class equipment and outdoor pool and sprint run.

Get A Jump On Your Day 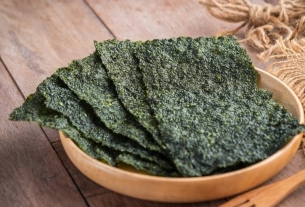 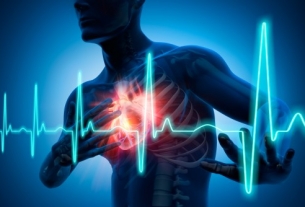