Minister of Youth, Sports & Culture Dr. Daniel Johnson today heaped praise on organizers of Kalik’s Festival of The Bahama Islands, saying the festival set for this Saturday “will serve to showcase all of the components that make us Bahamians.”
“On the occasion of the 40th Anniversary of the Bahamas’ Independence and as Minister responsible for Youth, Sports and Culture, it is a pleasure to congratulate Kalik and its organizers, for staging the ‘Festival of The Bahama Islands’ which also serves to highlight Kalik Beer’s 25th Anniversary Celebrations,” the Minister said.  “As this day-long cultural festival will serve to showcase all of the components that make us Bahamians, which have been woven into the fabric of our culture, I invite Bahamians and tourists alike to come out and immerse yourself in our Bahamian culture. Come and enjoy a sample of The Bahamas through our indigenous food, music, dance and art & craft specific to our individual islands.”
Created to help celebrate the 25th anniversary of Kalik, the Beer of The Bahamas, and coincide with the nation’s celebrations of sovereignty, the Festival is an official event of the 40th Anniversary of Independence. It is supported by the Ministry of Youth, Sports & Culture and sponsored by BTC, Coca-Cola and ZNS. Gates open at 10 am and performances kick off at noon with the Royal Bahamas Police Force Urban Renewal Band.
Live entertainment and demonstrations representing all the major islands of The Bahamas continue throughout the day with demonstrations ranging from catching crab to plaiting the maypole. Bands and leading musicians including songstress Veronica Bishop and the famed Elon Moxey are performing. The 8 pm concert with Fred Ferguson and Tingum ’em and Friends will be broadcast live on ZNS in high definition. A Junkanoo rush-out will wrap up the festivities that end at 10 pm.
According to Commonwealth Brewery Limited Managing Director Nico Pinotsis, Kalik and The Bahamas are so intertwined that it is hard to imagine one without the other.
“I remember flying to The Bahamas to take up my new position as Managing Director of Commonwealth Brewery,” said Pinotsis. “The flight attendant in conversation welcomed me to The Bahamas and in the same breadth advised me to ‘Be sure to try conch salad and a Kalik.’ I smiled because she was unaware of my association with the brand, but I was proud to see just how proud Bahamians were of their Kalik.”
From its inception, said Pinotsis, Kalik has been an important supporter of all things Bahamian.
“Kalik and CBL’s support of Junkanoo, regattas, local and Family Island festivals and homecomings has enhanced these areas of sports and culture over the last 25 years. Kalik brings family and friends together for good times. Who can imagine a conch salad or a game of dominoes without a Kalik?” he asked.
Organizing the festival, he said, felt like a natural.
“Celebrating the 25th anniversary of Kalik, not only the beer of The Bahamas, but a four-time Monde Selection Gold Award winner, and combining that with the 40th Anniversary of Bahamian Independence with a festival showcasing the talent and traditions of all the islands was our way of saying how proud we are to be Bahamian,” said Pinotsis. “We want to thank our other Bahamian partners, BTC, Coca-Cola and ZNS for joining us as sponsors. They helped make this possible.”
“It is Festivals such as these that solidifies our identity and expose young people to our Bahamian heritage, which is vital to our country’s continued growth and development,” said the Minister. “Once again, congratulations to Kalik Beer on the occasion of its 25th Anniversary Celebrations and a heartfelt thank you for bringing the islands of The Bahamas together, as we too celebrate our 40th Anniversary of Independence.” For more information on Kalik’s Festival of The Bahama Islands, phone 397-1452 or 397-1429. 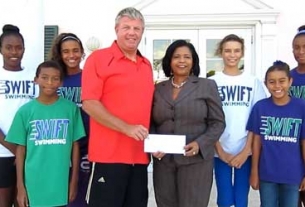 GBPA In Support Of ‘Swift Swimmers’ 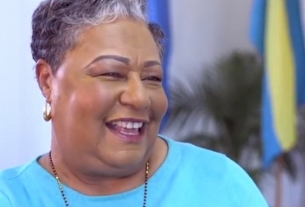 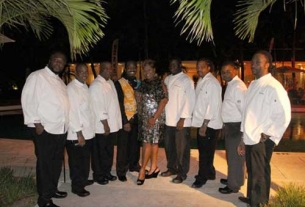