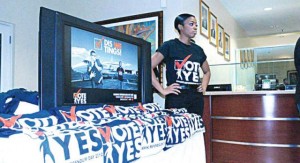 The organizers of the Fash Art show have taken sole responsibility for the presence of ‘Vote Yes’ vendors at an event which was held at the Public Treasury building last week Friday.

Fash Art said the pro-gambling group was a sponsor of last weeks event.

In a statement posted on its Facebook page, the event promoters said ‘Vote Yes was a late addition to their vendors list and that they did not have clearance from the Treasury Department to be at the government office.

The event, a showcase of visual artists, took place after working hours.

The group added that ‘Vote Yes representatives were asked to dismantle their display after Public Treasury employees voiced concerns to Fash Art over the pro-gambling promotion.

A picture of the booth at the event caused a stir on the social networking site Facebook this week, with many users questioning why the group was allowed to push its agenda inside a government building.

Prime Minister Perry Christie has repeatedly said that his administration will take no sides in the gambling debate.

“We the producers of the event held at the Public Treasury building on November 2 take sole and full responsibility for the public backlash of hosting the ‘Vote Yes group during our private event,” Fash Art said.

“The treasurer has been a major supporter of the arts in The Bahamas and sanctioned the event on the grounds of hosting the artists and pre-approved vendors. It was our late decision to include the ‘Vote Yes organization and share their information with our audience.

“The Treasurys personnel did ask for their dismantle and we honored their request.”

One user of the Facebook group Bahama Voice, under a post on the picture of the ‘Vote Yes set up, said the photo suggested the government wants people to support legalizing web shops.

Another user of the group said ‘Vote Yes should not have been allowed to further its cause in a government building.

However, Fash Art said it is unfair to blame the government for the groups presence.

“It’s unfortunate that a celebration of young talents in our country at a private event has been misinterpreted as an opportunity for government influence during a fragile moment in our political climate,” the group said.

The referendum is set for December 3.

The Christian Council has launched its ‘vote no campaign to counter the advertisements put out by pro-gambling groups.