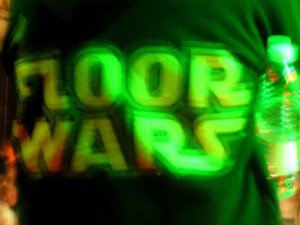 Some of you have probably already seen this.  But it is worth seeing again.

Below, is a video of Greg Pike, a homeless man from Santa Barbara, and his pets. Greg his friends work State Street every week for donations. The animals are pretty well fed and are mellow. They are a family.

Greg rigged a harness up for his cat so she wouldn’t have to walk so much (like the dog and himself).

At some juncture the rat came along, and as no one wanted to eat anyone else, the rat started riding with the cat and, often, on the cat!

The dog will stand all day and let you talk to him and admire him for a few chin scratches.

The Mayor of Santa Barbara filmed the video and sent it out as a holiday card.

Greg has been spreading this message of peace, respect, and tolerance for eight years. I think the point here is that if a dog, a cat and a rat can all get along, why can’t people?

Originally posted in 2007, the videos have received nearly 7 million views.

And you thought that Potcake was an interesting fellow.  lol

It’s Not About Jet Skis

What Are The Odds: Will A National Lottery Cure What Ails Us?