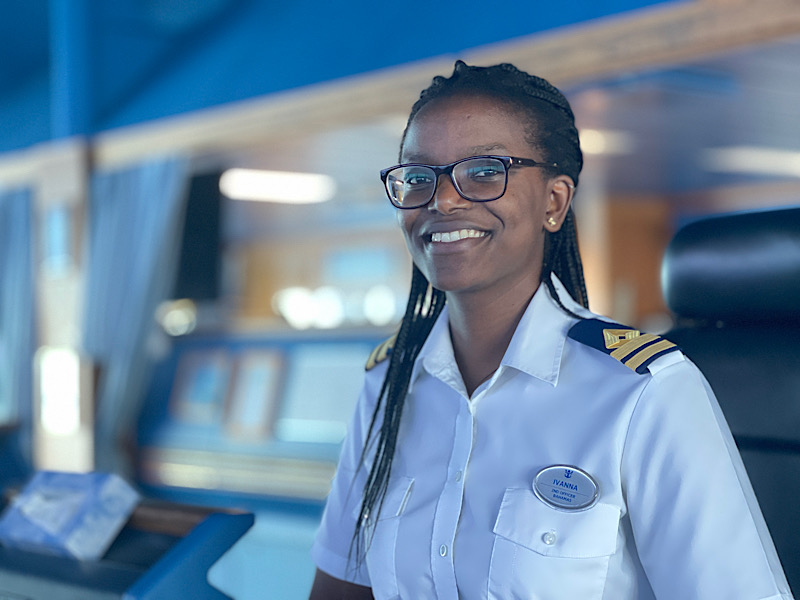 Second officer Ivanna Seymour, fifth ranking bridge officer in a crew of 1,200 on Navigator of the Seas, has her sights set high. She aims to be the first Bahamian captain of a Royal Caribbean ship.

If she makes that rank – and she is working toward it, she’s now the fifth-highest ranking bridge officer in a crew of 1,200 on Royal Caribbean’s Navigator of the Seas – Seymour will become the first Bahamian female to captain a cruise ship of that magnitude with responsibility for anywhere between 1,200 and 2,500 other crew members in addition to up to 6,800 guests.

It’s a career she has been preparing for since she first went to sea, crewing on the Dean’s Shipping mailboat, MV Legend. At 18 and fresh out of St. Augustine’s College, she spent a year working on the ship making regular hops between West Palm Beach, Green Turtle Cay, and Marsh Harbour in the Abacos and Nassau. She also crewed on its frequent charters to islands throughout The Bahamas.

Seymour’s love of math, her determination to learn celestial navigation, and her instinctual understanding of ship stability and loading factors drove her to go further at sea. She did what few females have ever done – becoming one woman among an all-male crew aboard a cargo ship, sometimes out to sea for months. The job was through Bahamas-based Campbell Shipping. The voyages were worldwide.

“We went all over, one day we’d be doing China to Vancouver and the next we’d be doing South America to Europe,” says Seymour, now 29. Back then, in her early 20s, often with crew who hailed from India, she drew on every ounce of mental strength she had. It wasn’t just the obvious concern about being the only female in a crew of 24 in an isolated world. The worst part was the daily treatment.

“In the beginning, I was assigned jobs every day like chipping, painting and mopping when I really wanted to be on the bridge, learning everything I could,” she said. Refusing to break under the gender prejudice, Seymour took it upon herself to learn on her own what she could about cargo loading, ship husbandry, meteorology and celestial navigation. Finally, on her second contract with the company, a new captain recognized her commitment and took the time to teach her.

She remained with Campbell Shipping for six and half years, working on bulk carriers, spending Christmases and birthdays thousands of miles from home. Contracts were seven months on, two months off. During the off-time, she studied. She earned licenses from South Tyneside College in the U.K. and elsewhere.

Today, Seymour holds the highest certification earned by a Bahamian female, Chief Officer Unlimited and she is close to earning her Master Mariner license.

Her most frightening moment came during a freak storm.

“We were a few miles off the coast of China on our way to Canada when we were hit by a typhoon,” she recalled. “We were literally ‘dancing’ on the bridge. I was sitting in a chair and the rogue wave came up and flung the chair. I slid from the port side all the way to the starboard.” The storm blew up so suddenly, crew members had no time to tie themselves to lifelines. Not worried that she could have been tossed overboard, she was fearful that the 189-meter ship (620 feet long) would capsize. I think people think the life aboard cargo ships is easy, but it is much more difficult,” says Seymour. “You are very isolated, you have to be very strong-willed. You are all alone for long periods of time.” 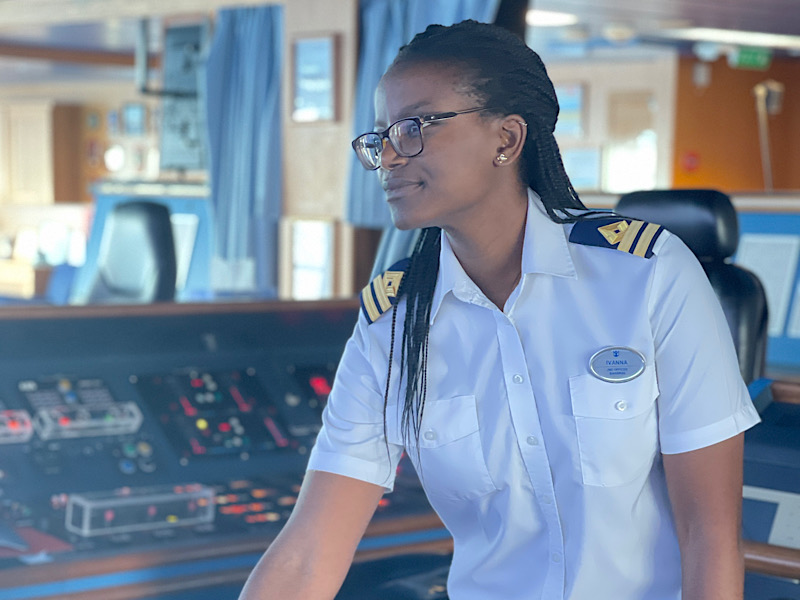 With certifications and licenses in hand, Seymour left the cargo world, took a chance and applied online for a position at Royal Caribbean.

In March 2019, she landed the job and is now second officer in charge of all lifesaving and firefighting equipment and appliances and keeping navigational watch on the 3,800-passenger, 1,020-foot-long Navigator of the Seas. She had one good year before the pandemic hit, leading to the ship being at anchor for 14 months.

“I love it,” she said. “Coming from cargo ships to passenger ships, it was like starting life over, going from isolation to being with people who are having fun and thoroughly enjoy their job. And I love the atmosphere at Royal Caribbean. They are always encouraging you to learn more, study more, take this training, do that so you can move up within the company. It’s a great atmosphere.”

Seymour may not have a quarter-million Instagram followers like McCue just yet, but she has a family that is continually amazed by and proud of her.

“I set out a goal and I am accomplishing it. One day, I will be the first female Bahamian captain on a Royal Caribbean cruise ship. One day in the next eight to 10 years.”

We wouldn’t be surprised, Ivanna, if it came sooner than that.

Bahamian Ivanna Seymour worked on a mailboat, then spent nearly seven years on bulk carriers, isolated from the outside world for months at a time before joining Royal Caribbean in 2019 and taking on the highest post of a Bahamian female, second officer. She hopes one day to become the first Bahamian female captain of a Royal Caribbean cruise ship. Royal Caribbean Group named its first female captain in 2007 and eight years later, its first American woman to take the helm of one of its Celebrity Cruises ships. 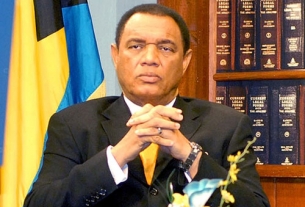 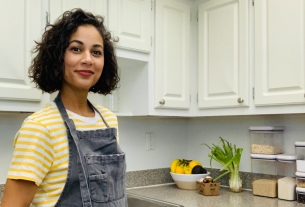 In The Kitchen With Kristin 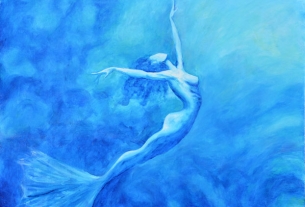