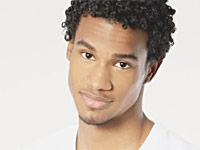 Bahamian male model Ajayi Ballentine-Clarke is on the verge of one of the biggest breaks in his career.

In a matter of days the 22-year-old will step into his role as the new face of the Labo Ethnik exhibition in Paris, France.

In its eighth year, the upcoming Labo Ethnik Fashion and Lifestyle showcase is expected to attract more than 30,000 visitors.

Ajayi was selected as Labo Ethnik’s new face by casting director and Saint Lucian fashion celebrity Vincent Mc Doom, who feels the Bahamian represents the next generation of modelling.

The event brings together fashion designers from five continents to exhibit collections during the annually held show which takes place on May 22 at Les Docks, Cite de la Mode, in Paris.

As organisers of the exhibit have taken a keen interest in highlighting the Caribbean, this year’s show will see designers from St Lucia, Trinidad, Guyana, Martinique, Guadeloupe, Barbados and Jamaica take part. Designers from China, Japan, Africa, Europe and the US will also be represented

Ajayi, who has undergone model training in Bahamas, said he is excited to be participating in the event with other established models from various parts of the world.

He said the doors have been opened and there is no way of predicting the endless possibilities that lie ahead for his career.

“Locally, I started out by participating in small fashion shows, private events and advertisements. Also, I travelled to Jamaica to do a show,” he told Tribune Arts and Entertainment.

“After I learned that I would not only be participating (in Labo Ethnik), but become the face of this momentous event, I was apprehensive because I was not prepared to get such a positive and timely response.”

St Lucian designer Vincent Mc Doom – who selected Ajayi, or “AJ” as he is also called – said in a recent online interview that Labo Ethnik has been in search for a masculine face for the exhibition and was immediately impressed by a photo of the Bahamian model.

“I’ve been looking for the ‘masculine face of Labo Ethnik’ for this season since I have already chosen the female face, Brittany Noon of St Lucia. Looking at his photo I imagined them together on the runway and on a poster. They really are the DNA of what I think newness represents in modelling,” Mr Mc Doom said.

“Ajayi was perfect, so we made contact and found out he was not in Europe, but from the Bahamas. I was seeking someone new and Ajayi met all the criteria of what we was looking for.”

It was in high school that Ajayi first considered he might have the potential to be a successful model. Since then, he has appeared on the runway for Islands of the World Fashion Week, in local magazines and in ads for Bahamian companies like The Sports Centre.

And now that he is breaking into the international modelling world, he has big dreams of hitting the runways of major fashion shows. However, Ajayi knows there is still a lot work to be done.

“What I love most about modelling is the vision, talent and beauty merged into an event,” he said. “For me it is difficult being a male model, because Bahamian models are not paid the way they should be. Also locally, being a male model is not seen as the most macho title.”

He said although his career is just taking off, he has learned a great deal in a short period of time.

“The industry is just what I imagined it to be. I learned that networking is very important. I have learned that in order to make it, not just with modelling but anything, you must be assertive and you must never give up. You can get 1,000 no’s and your 1,001th answer may just be your ticket to Paris,” he told Tribune Arts and Entertainment.

While Ajayi enjoys modelling, he hopes it will pave the way for him to transition into an acting career.

“Years from now I see myself playing a role in a movie. I have always wanted to act,” he said. 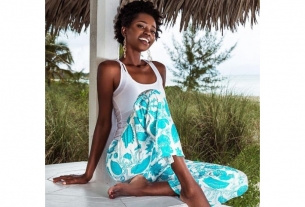 Model of the Month: Melan Georges